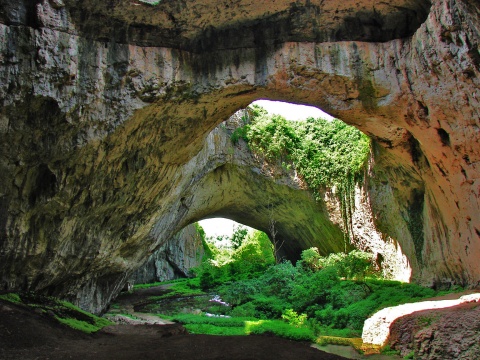 The spectacular entrance to the Devetashka Cave in central northern Bulgaria. File photo

Bulgaria's Supreme Administrative Court has confirmed a lower-instance court ruling which determined that shooting of scenes of Hollywood movie "The Expendables 2" in Bulgaria's Devetashka Cave was in breach of environmental regulations.

The case was opened by Bulgarian environmental organization Zeleni Balkani against the Pleven Regional Environmental Inspectorate (RIOSV), which granted a permission for the film shooting in the cave.

Environmentalists argued that the inspectorate broke regulations by granting such a permission in a protected area, which is home to one of the largest bat colonies in South Eastern Europe.

They further claimed that the fall 2011 movie shooting significantly harmed the bats, who were then preparing for hibernation.

In February, the Pleven Administrative Court found that Zeleni Balkani's claim was well founded and that the Regional Environmental Inspectorate was in breach of regulations by granting the permit.

The court decision was appealed, chiefly on procedural reasons, but the appeal was not upheld by the Supreme Administrative Court, which is the last instance in the case.

Zeleni Balkani have recalled that they have filed a separate signal regarding "The Expendables 2" shooting in the Devetashka Cave to the European Commission.