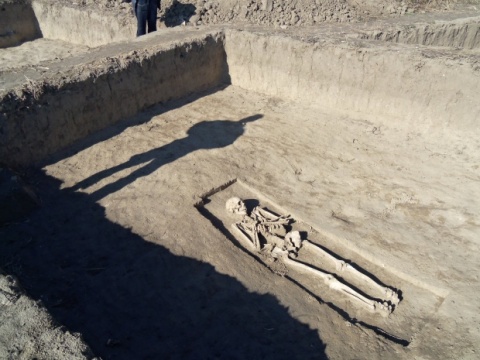 The newly-discovered necropolis in Bulgaria includes tombs from the Thracian times to the times of the First Bulgarian Kingdom. Photo by Ruse History Museum

A necropolis with over 100 burials has been unearthed during archaeological excavations near the village of Marten in northern Bulgaria.

The discovery was made by the archaeologist from the Archaeology Museum in the Danube city of Ruse, Deyan Dragoev.

The necropolis is on the path of the future gas connection between Bulgaria and Romania.

The site includes tombs from the Thracian times to the times of the First Bulgarian Kingdom. The oldest ones date from the 5th – 4th centuries B.C. Some reveal very interesting rites such as the tomb of a decapitated soldier, whose head was laid on his lap, while others have been buried with gold and silver jewelry or with their dogs.

Some skeletons have deformed skulls, which have been typical for the First Bulgarian Kingdom as a sign of high position in society and of nobility. Noble children then had their heads tightened with headbands in order to change the form of the skull, experts say.

Remnants include wooden coffins, and ceramics and glass from Roman times.

The two Thracian tombs, according to archaeologists, show that a Thracian settlement, unknown until now, has been located nearby.

On Wednesday, the Ruse archaeologists sent bone material for analysis at the Bulgarian Academy of Sciences.