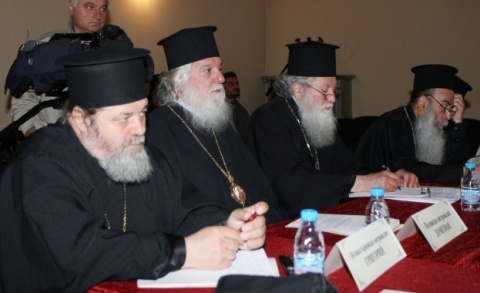 The Holy Synod of the Bulgarian Orthodox Church met at the beginning of the week to discuss the election of a new Patriarch. Photo by Cross.bg

Bulgaria's new patriarch, to succeed the late Patriarch Maxim, will be elected on February 24, 2013, the Holy Synod of the country's Orthodox Church decided at a meeting on Tuesday.

A rift among the Bishops shook the Holy Synod after Bulgaria's Patriarch Maxim, who led the Church since 1971, passed away on November 6 at the age of 98.

The election of a new Patriarch must be organized not later than six months after Maxim's death, thus the deadline is March 6, 2013.

In the aftermath of the Patriarch's death and of the controversial election of Varna Metropolitan Kiril for Sofia Metropolitan and interim Patriarch, Plovdiv Metropolitan Nikolay declared he was withdrawing for 40 days for mourning and would not attend any Holy Synod meetings.

But he made a surprise appearance at the sitting on Monday.

The news came a day after, during his first mass as Sofia Metropolitan, Kiril hinted that those who would miss the Holy Synod's sittings in sign of opposition for his election could face sanctions.

Approached by the media Monday, Nikolay only said he would speak up after the 40-day mourning. He refused to answer if his attendance could be interpreted as reconciliation with the new Holy Synod leadership.

One day earlier, in an open letter, sent to the media and the Bulgarian Holy Synod, the Plovdiv clergy declared firm support for their Metropolitan, condemning the continuing attacks and pressure on him.