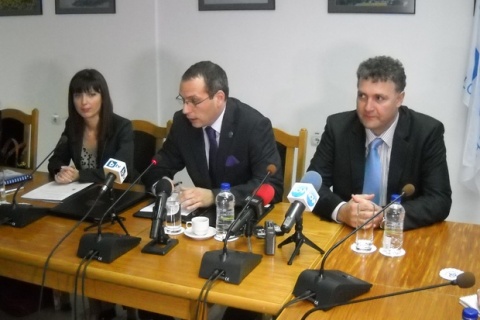 Project company Kozloduy NPP New Capacities and Bulgarian-Spanish consortium Dicon- Acciona signed Monday a contract for the EIA of a seventh unit at the Kozloduy N-plant. Photo by dariknews.bg

Project company Kozloduy NPP New Capacities signed Monday a contract for an environmental impact assessment (EIA) of the investment proposal for the construction of new nuclear capacity at the site of the Bulgarian N-plant.

The EIA report is to be prepared by the Bulgarian-Spanish consortium Dicon- Acciona Engineering, which won a tender.

The value of the contract is nearly BGN 2 M, VAT excluded, while the term for the completion for the EIA is 9-12 months.

Lyuben Marinov, Executive Director of the Kozloduy NPP New Capacities project company, explained Monday that the EIA would have to take into account the cumulative impact of the new capacities on the surrounding municipalities, including on Romanian territory.

He added that the terms of reference included all requirements presented by Romania's Environment Minister.

Verginia Dimitrova, authorized representative of the Bulgarian-Spanish consortium, explained that the project would involve over 40 specialists, including international ones.

The Bulgarian representative in the consortium, Dicon Group, is a company with 17 years of experience in the consultancy services industry.

One of the latest projects of the company involved field work on Natura 2000 areas in Bulgaria.

Spanish consultancy Acciona Ingenieria was established in 2010 after the merger of 2 other companies with over 50 years of experience in the spheres of environment, engineering, and regional development.

The company has completed projects in over 40 countries on 5 continents.

The contract signing was attended by Valentin Nikolov, CEO of the Kozloduy NPP, who declared that the tasks preceding the final decision on the construction of a seventh unit at the N-plant were getting completed one after the other.

The Bulgarian government decided to build a 7th unit at the Kozloduy NPP in April after quitting the project for the construction of a nuclear power plant in Belene.

Subsequently, the Borisov government decided to install the 1000 MW reactor already produced for Belene by Russian contractor Atomstroyexport, a subsidiary of Rosatom, at the existing plant in Kozloduy.

Finance Minister Simeon Djankov has assured that the new unit is to be designed and built on a commercial basis, without government guarantees, and without using taxpayers' money.

At present, only the 1000 MW units 5 and 6 are operational at the Kozloduy NPP, after Bulgaria agreed to shut down the 440 MW units 1-4 in 2002 and 2006 as part of its EU accession talks under pressure from Brussels.

The Bulgarian government has also initiated a program to extend the life of Units 5 and 6 by at least 20 years as their life is set to expire in 2017 and 2019 respectively.