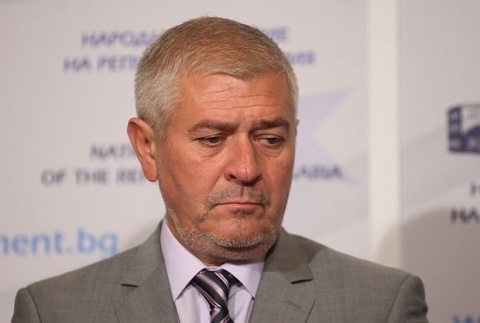 UDF MP, Vanio Sharkov, does not want to have his party, the symbol of democracy in Bulgaria, become a crutch for the ruling GERB. Photo by BGNES

The Members of the Parliament from Bulgaria's right-wing Union of Democratic Forces, UDF, have declared opposition to any party nomination for constitutional judge.

Their decision was reported Friday by MP, Vanio Sharkov, who, in speaking for the media, stressed the issue was not to propose a name, but to not turn UDF into a crutch for the ruling, center-right Citizens for European Development of Bulgaria party, GERB, in helping them to wipe-off their own shame.

Sharkov further announced that the UDF National Executive Council, NIS, has scheduled a meeting for Monday in the albescence of the two UDF MPs who are also NIS members.

"There are rumors that some people will be expelled from the party, all or some from the parliamentary group. Regretfully, the current UDF leadership includes some cowards, who cannot even face people in the eye when expelling them. They would do anything for GERB's pittance. 23 years ago, we established UDF in the name of freedom, now people don't even know Emil Kabaivanov; they don't know who he is, and he is the current UDF leader," said the outraged UDF MP, adding he did not want to work with people who were deserters and cheats.

The Bulgarian Pressa (Press) daily wrote earlier that the NIS leadership met in secret Thursday to discuss how they can expel the 9 party MPs, who opposed the nomination of former right-wing President Petar Stoyanov (1997 – 2002) for constitutional judge on grounds the bid has been negotiated with GERB under the table.

On Friday, speaking for the Bulgarian National Radio, BNR, and for TV7, NIS member, Boris Markov, denied rumors of expulsion. Markov stressed the masks have fallen and those against Stoyanov were working for the Bulgarian Socialist Party, led by Sergey Stanishev, and for Ivan Kostov, leader of the other party in the weakened right-wing Blue Coalition, Democrats for Strong Bulgaria, DSB.

The rift in the Blue Coalition started in the spring of 2012, when UDF decided they would not run on the same ballot with DSB in the upcoming 2013 general election since a number see Kostov as the archenemy and the power-hungry individual who in 2000s split Bulgaria's symbol of democracy – the right-wing movement.

The decision, however, prompted UDF leader and MP, Martin Dimitrov, to resign. He was replaced by the largely-unknown Mayor of the town of Karlovo, Emil Kabaivanov.

Meanwhile, speaking for bTV, Kabaivanov said the behavior of the UDF MPs will be discussed at the NIS meeting, but also declined confirming the expulsion rumors.

A seat in the Constitutional Court remained empty on November 15, when Bulgarian President Rosen Plevneliev walked out just as controversial judge Veneta Markovska was about to swear in.

Markovska's name had become implicated in allegations of trade in influence, which she was unable to dispel, but nevertheless chose not to resign, after being elected to the Constitutional Court by Parliament.

After Plevneliev's move, last Friday Bulgarian MPs decided to launch a new procedure to choose another constitutional judge from the parliamentary quota.

On Monday Bulgaria's Prime Minister Boyko Borisov unexpectedly informally invited the UDF to nominate a replacement for Markovska on grounds the formation was the oldest right-wing party in Bulgaria and is a member of the European People's Party, EPP, similarly to his ruling Citizens for European Development of Bulgaria party, GERB.

The move is interpreted as an attempt from the PM to attract the allegiance of the Union and create further divisions in the feeble Blue Coalition between the UDF and DSB.

On Tuesday, Kabaivanov announced the nomination of the former President.

After Petar Stoyanov's nomination, it emerged that he faces boycott by all opposition parties in the Parliament, including his own.

In addition to own right-wingers, the Socialist party, BSP, and the ethnic Turkish Movement for Rights and Freedoms, DPS, have also said they will boycott the new procedure since, they claim, it has been rigged.

Stoyanov has asked to have three days to say if he would accept the nomination and is likely to turn it down, deepening the constitutional crisis, according to experts and media reports. He already said he had too many international commitments and is expected to decline not only because of his regular activities abroad, but also because of the stern opposition his candidature will face in the Parliament.

On Thursday, the Parliament voted to strike back Markovska's appointment and to launch a replacement procedure.

In his Friday interviews, Boris Markov insisted not Stoyanov would accept the nomination, but UDF MPs will end up submitting his bid and voting for him. He also formally announced possible plans for a coalition with GERB in the next Cabinet.

The three days for Stoyanov to give an answer have actually expired and he is reported to be currently in Vienna.