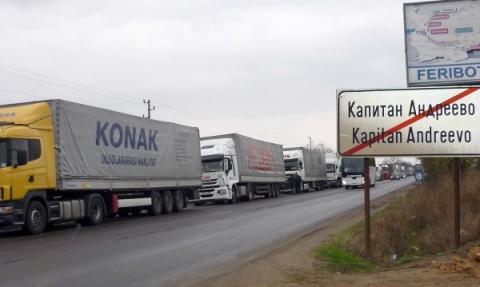 A line of 300 trucks formed again at Kapitan Andreevo on the Turkish-Bulgarian border Friday, blamed on repair works at the Bulgarian side. File photo by BTA

A truck line has formed once again Friday at the Kapitan Andreevo-Kapakule border crossing point between Bulgaria and Turkey.

Over 300 trucks are currently waiting to cross the border.

Turkish authorities have issued an advisory calling on drivers to avoid Kapakule and use the other two crossings - Lesovo - Hamzabeyli and Malko Tarnovo – Derekoy. There is, however, a line of 150 trucks reported at Hamzabeyli.

The frequent congestions occur due to repair works at the Bulgarian border checkpoint of Kapitan Andreevo.

The World Bank granted a loan of EUR 52 M, which, in addition to State budget funding, is being used to expand traffic lines on the Bulgarian side and to construct a new administrative building.

Despite assurances of Bulgarian border authorities that the repairs would not affect the processing of vehicles, the works impede traffic through the checkpoint daily, particularly affecting freight trucks.

Traffic flow is down by half – from 1 000 trucks passing the border in 24 hours to 500. The repairs are supposed to take nearly two years.