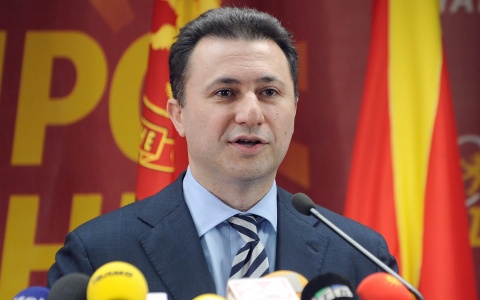 Macedonian Prime Minister and the leader of of the ruling VMRO DPMNE, Nikola Gruevski announces to journalists that his Government will propose to Macedonian parliament early parliamentary elections in Skopje, The Former Yugoslav Republic of Macedonia, 30

Macedonian Prime Minister Nikola Gruevski has said he expects support from Greece and Bulgaria for the decision for the start of Macedonia's EU accession talks.

"I expect that Greece, being the oldest EU Member State in our region, as well as a confirmed friend of enlargement, will back the decision on starting Macedonia's EU accession talks in December, thereby providing a decisive political contribution to the the revitalization of the European integration perspective of the the entire Balkan region. Macedonian nationals expect the same from Bulgaria," he stated, as cited by the Bulgarian telegraph agency (BTA) and dnevnik.bg.

"Our desire is to walk the path to EU membership together with Greece. With a great deal of determination we initiated a number of concrete steps to extend bilateral cooperation and mutual trust," Gruevski noted.

"Nobody wants more than Macedonia to have the last obstacle in our path to European and Euro-Atlantic goals removed," Gruevski emphasized, adding that Macedonia wished to fast-track talks with Greece under the aegis of the United Nations as much as possible.

He argued that history had shown that blockades and the lack of a compromise approach had never led to the resolution of certain bilateral issues, unlike European and Euro-Atlantic integration.

Speaking about regional cooperation, Gruevksi highlighted that Macedonia would continue to maintain good relations with all its neighbors, adding that the cooperation with Bulgaria was of particular importance for the country.

"But we must leave history to historians. The declaration from 1999 remains a good framework for the future development of relations. We have established a rich legal framework of bilateral contracts which should contribute to the improvement of relations and the strengthening of cooperation on concrete projects of practical interest to the citizens," the Macedonian Prime Minister declared.

"Civil society and the media on both sides must play an important role in encouraging mutual understanding and respect," Gruevski reasoned.