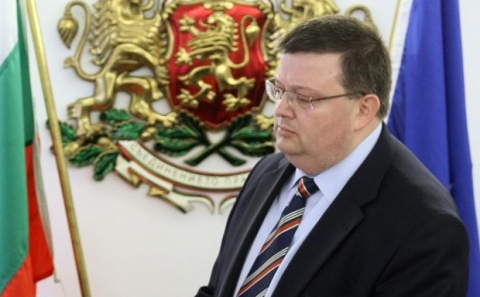 A photo by BGNES of Sotir Tsatsarov, Chairman of the Plovdiv Regional Court and the only Bulgarian Chief Prosecutor candidate so far.

The spouse of Sotir Tsatsarov, Chairman of the Plovdiv Regional Court and the only Bulgarian Chief Prosecutor candidate so far, has been implicated in a tax evasion scam.

In 2008, Meglena Tsatsarova has been involved in a deal where the actual price of two real estate properties has been purposefully concealed, the site for investigative journalism Bivol.bg writes Wednesday.

Tsatsarova and her colleague, Adela Katz-Boyadzhieva, wife of attorney, Ivan Boyadzhiev, have purchased two orchards in the village of Kostievo, near Plovdiv.

Bivol estimate the profit for the buyers at BGN 5 000 from the spared one time property tax for the transaction and the registration tax. The act is punishable by a fine under Bulgarian tax legislation.

The real estate transactions are listed with the Registry Agency, in a court rule of the Kardzhali Regional Court (under a case filed later) and in Tsatsarov's own property declaration.

After the purchase took place, it emerged that the female seller was not the real owner of the orchards. The owners were her cousins and they began claiming their property. This prompted the two buyers, who are also notaries public, to file a case with the Court in Kardzhali, seeking to get their money back.

The case was tried in Kardzhali because of Tsatsarov's senior magistrate post in Plovdiv.

The trial notes include quotes from the plaintiffs' lawyer, which also show that the listed price of BNG 1000 has been made-up under the request of the defendant, on grounds she had not wanted a third party to realize how much money she had gotten, while the real sales price was EUR 60 921 (BGN 119 151, according to the Central Bank exchange rate at the time of the transaction).

The preliminary contract lists the amount of EUR 60 408 as compensation to be paid if the deal was to fall through because of the seller, while the actual purchase price is listed as BGN 1 000.

The defendant-seller has claimed before the Court that she got BGN 1 000 for the orchards and denied knowing anything about a made-up amount.

The magistrates, however, sentenced her to refund the entire amount of the compensation plus interest, a rule she appealed along with challenging her cousins' property rights.

At the time, the defendant had already purchased an apartment in Plovdiv and transferred its ownership to her son. The cousins then filed a claim against the notaries.

In his 2008 property declaration, judge Tsatsarov has written that his spouse has become owner of two orchards for the price of BGN 59 604.

In July 2012, the Bulgarian Trud (Labor) daily wrote that Meglena Tsatsarova, citing her tax declaration, makes BGN 17 300 a month as a notary public in Plovdiv.