No Sign of Romanian Worker Who Fell off Danube Bridge 2 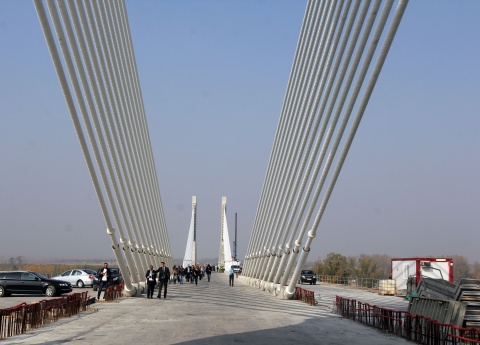 The 2km Danube bridge is a key element of a European transport corridor connecting the German city of Dresden with Istanbul in Turkey. Photo by BGNES

Bulgarian rescue teams have been searching in vain for a Romanian worker who fell off Danube Bridge 2 into the river and presumably drowned.

The Romanian national, whose name was not disclosed, has been employed by the Romanian subcontractor of Spanish FCC company, which was in charge of building the second bridge, linking the Bulgarian city of Vidin and the Romanian city of Calafat.

An ambulance was called out the location before 10 p.m., but doctors returned back to the town of Vidin without being able to get to the site and locate the missing man, authorities said.

The 2km Danube bridge is a key element of a European transport corridor connecting the German city of Dresden with Istanbul in Turkey.

The other bridge on the 610km Danube section of the Bulgarian-Romanian border, links Russe in Bulgaria and Giurgiu in Romania by road and rail.