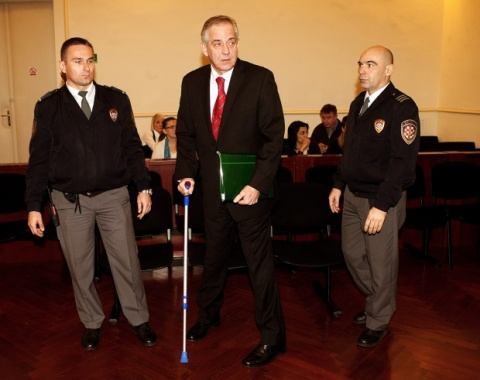 Former Prime Minister of Croatia Ivo Sanader was convicted of taking USD millions in bribes from a Hungarian energy company and an Austrian bank. Photo by EPA/BGNES

A court in Croatia's capital Zagreb has sentenced the country's former Prime Minister Ivo Sanader to 10 years in jail for taking bribes.

Sanader, who served as PM from 2003 to 2009, was convicted of taking USD millions in bribes from a Hungarian energy company and an Austrian bank.

He took USD 10 M from the Hungarian oil company MOL in return for securing it controlling rights in Croatia's state oil company Ina.

In 1995, when Sanader was a Deputy Foreign Minister, he received USD 695 000 in bribes for a credit deal with the Hypo Alpe Adria Group, which gave the Austrian bank a leading position in Croatia.

The former PM denies any wrongdoing, insisting the case against him was politically motivated.

Sanader, 59, is the most senior official to have been convicted of corruption in Croatia.

His crimes are considered by the prosecution "war profiteering" because at the time, Croatia was still fighting its war of independence from Yugoslavia, meaning it had trouble accessing international markets. The Prosecutor asked earlier for 15 years of jail time.

Sanader is also on trial, separately, for allegedly creating slush funds for his political party, the conservative Croatian Democratic Union (HDZ), by skimming off profits from state companies and manipulating public tenders.

The HDZ ruled the country for eight years until its defeat in elections in December 2011.

Croatia expects to join the EU in July of next year. The case was closely watched by the EU as the country is under pressure to tackle widespread corruption before the membership is finalized.

BBC writes Tuesday, quoting its correspondents, the EU was taking a harder line with the Balkan state than with Romania and Bulgaria, which were allowed to join the bloc despite struggling to address their problems with corruption.