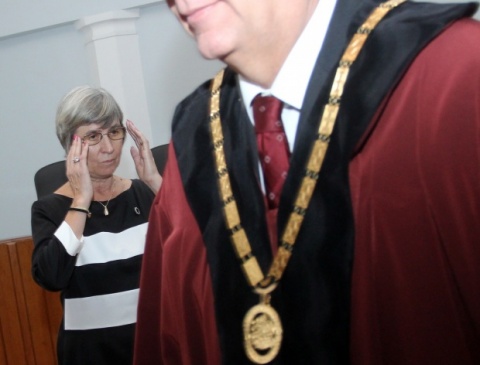 Controversial Bulgarian judge Veneta Markovska has decided to go on retirement and has filed her application Tuesday.

She, however, reiterated that she had not committed any violations whatsoever, but decided to retire in order to halt all speculations about her and the State institutions.

The judge thanked all who supported her and trusted her, stressing she still believed in justice.

Despite a tipoff sent to the opposition and an investigative journalistic report from 2010 raising suspicions of corruption and trading influence, at the end of October the Members of the Parliament voted for her appointment without a hearing and without asking her for explanations.

Markovska, Deputy Chair of the Supreme Administrative Court, VAS, was nominated by independent MPs, and supported by 78 MPs from the ruling Citizens for European Development of Bulgaria party, GERB, in addition to MPs from opposition Bulgarian Socialist Party, BSP, and ethnic Turkish Movement for Rights and Freedoms, DPS.

Last Thursday Markovska, who was to become one of the two new constitutional judges from the parliamentary quota, was prevented from taking the oath of office by Bulgarian President, Rosen Plevneliev, who left the ceremony blocking her appointment.

She said then that she intended to take the oath and after that withdraw immediately from the post with the country's highest Court. Her intentions about the latter remain unknown since after Plevneliev's unprecedented move in the Court's 21-year history, the magistrate also declared she would not give up the constitutional judge position and would seek her rights legally.

On Monday, Prime Minister, Boyko Borisov, met with the leader of the Union of Democratic Forces, UDF, Emil Kabaivanov, and announced in the aftermath that GERB MPs will support a right-wing nomination for a new constitutional judge.

The nomination of the right-wing Blue Coalition between UDF and Democrats for Strong Bulgaria party, DSB, was the Deputy Speaker of the Parliament, Ekaterina Mihaylova from DPS, but she lost to Markovska. On Monday, DSB, led by former PM Ivan Kostov, said they would not have a candidate over the tarnished procedure.

The Blue Coalition, however, will be extinct after the end of term of the current Parliament, since earlier in the year UDF voted to terminate their membership. Kabaivanov, who opposes Kostov, stated Monday they will have their own candidate.

The official announcement of the nomination is scheduled for 12:30 pm Tuesday after a meeting of the party's national leadership.

Markovska's election led to the European Commission issuing of two warnings it could publish an emergency report for Bulgaria on the so-called Cooperation and Verification Mechanism for Corruption and Organized Crime.

Last Thursday, the President left at the moment Markovska had to be sworn in. He delivered an address to the new members of the Constitutional Court, but left the hall when it was Markovska's turn to take the oath. Plevneliev's move blocked her joining of the Constitutional Court since under the law the oath is considered valid only if taken in the presence of the Head of State.

GERB representatives have repeatedly stressed that Anastasov was their nomination.

On Friday, the Bulgarian Parliament's Legal Committee decided to start a new procedure to elect and appoint a constitutional judge from the parliamentary quota. The Committee now pledges a full probe of any possible tipoffs, even anonymous ones.

The Blue Coalition was the only political formation that did not support Markovska's nomination back in October.