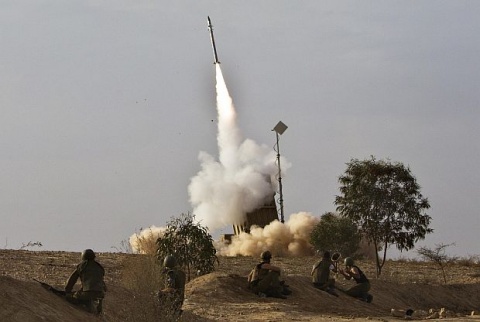 Hospitals in Gaza are overwhelmed with casualties and short on supplies, the World Health Organization reports on the fifth day of the Israel – Hamas conflict.

The UN called on people to donate USD 10 M to secure medical supplies for the next three weeks.

The WHO further says that 382 have been injured in the rocket strikes – 245 adults and 137 children. Many are listed in hospitals with burns and wounds.

The death toll has reached 51, according to local authorities, cited by BBC. Of them 48 are Palestinians, including eight children. Three Israeli civilians were killed by a rocket Thursday. Palestinian medical officials said one strike killed two infants from the same family Saturday.

As Israel continued the airstrikes Saturday into Sunday, a missile has hit a media tower block in the center of Gaza City, reportedly injuring six Palestinian journalists. One had to have his leg amputated.

The BBC correspondent reports a Hamas television station, al-Quds TV, was based in the media tower block, which had until last year housed the BBC's Gaza office. It was still being used by Sky News and ITN.

Israel informs it had targeted "a communications antenna" in northern Gaza, as well as a Hamas training base, smuggling tunnels and underground rocket-launching sites.

The operation to stop Hamas from firing rockets into Israel is codenamed Pillar of Defense and was launched Wednesday with an airstrike that killed Hamas military chief Ahmed Jabari.

According to Israel's army, Operation Pillar of Defense has targeted more than 900 sites, while nearly 500 rockets fired from Gaza had hit Israel.

Another 257 missiles had been intercepted by its Iron Dome defense system, it added.

On Saturday, militants in Gaza fired dozens of rockets into Israel, including one at Tel Aviv that was intercepted.

Egypt's President had said earlier there were "indications" a truce could be reached but that there were "no guarantees".

Mohammed Mursi was speaking in Cairo after meeting Turkish Prime Minister Recep Tayyip Erdogan. Hamas leader Khaled Meshaal is in the Egyptian capital for the talks, aimed at bringing an end to the conflict.

The Arab League has been holding an emergency meeting, also in Cairo, and announced it would send a delegation to Gaza in the next few days.

Israel earlier put 75 000 reservists on stand-by amid speculation of a ground invasion.

Before the recent offensive operation, codenamed Pillar of Defense, Israel had repeatedly carried out air strikes on Gaza, as Palestinian militants fired rockets across the border.