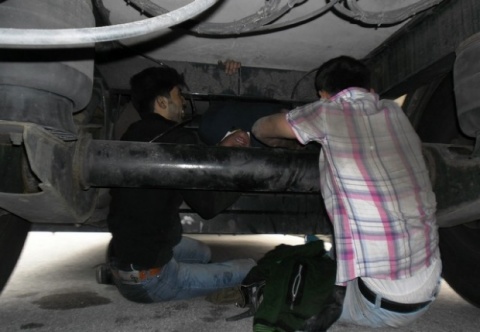 Six of the detained were spotted Friday by officers of the Border Police Unit in Elhovo on the territory of the southeastern village of Goliam Dervent.

The illegal immigrants, three men aged 32 to 45 and a woman with two children aged 5 and 6, had entered Bulgaria from Turkey.

Meanwhile, three other foreign nationals aged 18-26 were found in a hidden compartment of a cargo vehicle with a Polish registration plate.

The three were detected through an X-ray view of the freight vehicle entering Bulgaria through the Kulata border crossing point.

On Saturday morning, at around 6.50 a.m., officers of the Border Police Unit in Elhovo arrested seven men who claimed to be Palestinian nationals on the territory of the southeastern village of Varnik.

One hour later, border police detected a 10-strong group of men and women without ID papers on the territory of the southeastern village of Prisadets.

Pre-trial investigations have been opened into the cases.