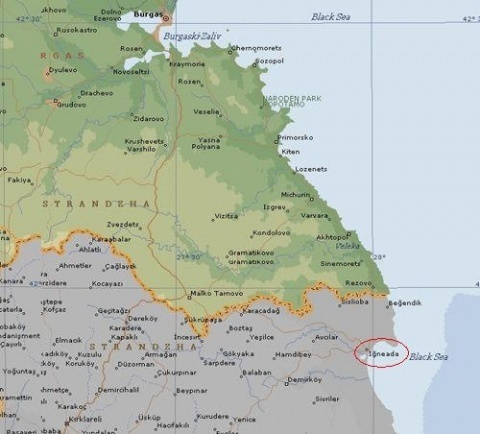 The Bulgarian Black Sea city of Burgas is only 75 km north of Turkey's Igneada. Map by stroitelstvo.info

The Bulgarian village of Rezovo, located in the southeasternmost corner of the country, off the border with Turkey, will stage a torchlight rally Saturday evening against the construction of a thermal power plant (TPP) in the town of Igneada.

Citizens of the Burgas Municipality will stage a rally coinciding with a protest of Turkish environmental organizations, which will light fires against the implementation of the TPP project, according to reports of the Bulgarian National Radio (BNR).

The Bulgarian protest is organized by the municipal organization of the left-wing Bulgarian Socialist Party (BSP) in the town of Tsarevo.

"We are not pursuing any political goals, we are expressing civil discontent," said Petko Arnaudov, former mayor of the town and current municipal leader of the socialist party.

On Thursday, Environment Minister Nona Karadzhova declared that Bulgaria wanted to have a say in the environmental impact assessment (EIA) of the thermal power plant (TPP) to be built several kilometers away from Turkey's border with Bulgaria.

She made clear that Bulgaria's Ministry of Environment and Water was preparing an official letter to Turkey which would be sent via the Foreign Ministry.

Karadzhova explained that Bulgaria would ask Turkey to provide access to information on the TPP project.

The two discussed, among other issues, the construction of the TPP near the Bulgarian-Turkish border.

"We are worried by the news and we hope that any investment plan will be subject to a detailed inspection," Dobrev commented, as cited by the press office of Bulgaria's Ministry of Economy, Energy, and Tourism.

Yildiz assured him that the project would not be implemented without a positive EIA.

On Novemner 8, Bulgarian media reported that a private Turkish company planned to build a 1200 MW TPP running on imported coal in the town of Igneada.