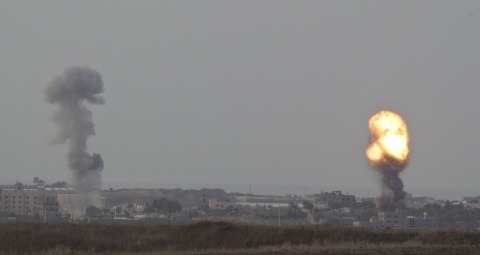 Israeli airstrikes have hit the headquarters of Gaza's Hamas government overnight in the fourth day of bombing.

Gaza City has been hit by a series of large explosions shortly after 03:00 local time (01:00 GMT) Saturday morning. There has been another series of strikes in and around the city shortly after 05:00 local time, with several targeting Hamas' cabinet buildings, which the BBC correspondent say were likely to have been empty.

The correspondent has also cited Gaza sources reporting bodies were trapped under rubble and three members of Hamas's military wing have been among those killed overnight.

Israeli aircraft also targeted electricity transformers and the network of tunnels used to smuggle goods and weapons from Egypt into Gaza, according to BBC.

Israeli military spokeswoman Avital Leibovich is quoted saying that a total of 200 targets had been hit overnight.

The death toll since Wednesday, when Israel killed Hamas's military chief, Ahmed Jabari, has reached 34 Palestinians - militants and civilians, including at least seven children, and three Israelis. A senior commander was killed on Friday, officials say.

On Friday militants in Gaza continued to fire rockets into Israel, aiming at Tel Aviv and Jerusalem. They hit Tel Aviv for the first time in 20 years while Haaretz newspaper reported it was the first time since 1970 that a rocket had been fired at Jerusalem.

Warning sirens have been heard in parts of southern Israel early Saturday, but there were no reports of casualties from Palestinian rocket attacks.

Israel earlier put 75 000 reservists on stand-by amid speculation of a ground invasion.

Before the recent offensive operation, codenamed Pillar of Defense, Israel had repeatedly carried out air strikes on Gaza, as Palestinian militants fired rockets across the border.

Western leaders and UN Secretary General Ban Ki-moon have appealed for both sides to stop the escalation in violence.

Called by Israeli Prime Minister Benyamin Netanyahu on Friday, US President Barack Obama reiterated his country's support for Israel's "right to defend itself".

Mursi has called the Israeli raids "a blatant aggression against humanity" and promised that Egypt "will not leave Gaza on its own".

BBC reminds that ties between Hamas and Egypt have strengthened since Mursi's election earlier this year and that Hamas was formed as an offshoot of the President's Muslim Brotherhood.