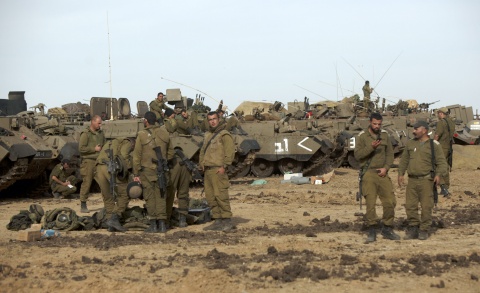 Israeli soldiers next to their armored personnel carriers (APC), on a military site along the Israeli border with the Gaza Strip, on 16 November 2012. EPA/BGNES

Israeli Defense Minister Ehud Barak has sought government approval to mobilize up to 75 000 reserve troops for Israel's Gaza campaign, according to sources cited by international media.

The sources, speaking after Palestinian rockets were fired at Jerusalem and Tel Aviv, said ministers were being polled by telephone by the cabinet secretary to approve the call-up.

Earlier reports said the Israeli army had started calling up 16 000 reservists in what might be a preparation for a possible ground offensive into the Gaza Strip.

"As part of Operation Pillar of Defense, the IDF (army) will begin recruiting 16,000 reservists," Israeli the military said on its official Twitter feed.

Israel's Defense Minister Ehud Barak on Thursday approved the call-up of 30,000 reserve soldiers, who can be drafted into action by the military at any point, the army's official spokesman said, as cited by international media.

The move came as Israel pressed a relentless air campaign against Gaza militants which looked increasingly likely to expand into a ground operation after a rocket struck the sea just off the coast of Tel Aviv and a second landed to the south of the sprawling coastal city.

"We are in the process of expanding the campaign," the military's chief spokesman, Brigadier General Yoav Mordechai, told Channel 2 television on Thursday.

"The defense minister approved ... based on the army's request, the recruitment of another 30,000 soldiers. We will determine how many of them will be called in," he said.

"We are preparing all the military options, including the possibility that forces will be ready to enter Gaza in the event that the firing doesn't stop," he wrote in a series of postings on his official Twitter account.