Opposition Rally in Sofia Ends with Riot, Clashes with Police 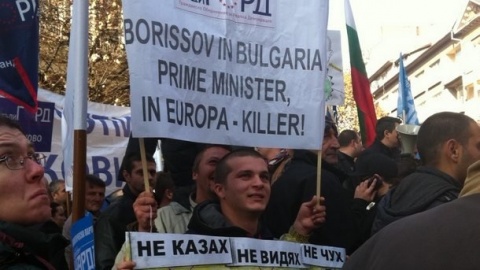 Followers of Bulgarian GORD party staged a protest rally that turned into a riot and clashes with police in downtown Sofia. Photo by BGNES

The protest rally in Sofia, organized by the party Civic Movement for Real Democracy, GORD, of Bulgarian independent Member of the European Parliament, Slavi Binev, has turned into a riot and clashes with police.

It was announced earlier that the rally of the party, whose abbreviation GORD in Bulgarian means PROUD, will be held on the "Garibaldi" square in downtown Sofia, but it emerged that the City Hall has refused to issue a permit for this location. All demonstrators were redirected by the police to a nearby park, prompting Binev to clash with the policemen and call on supporters to follow him.

The Bulgarian National Radio, BNR, reports the crowd turned much stronger than the police force and everyone ended at the square.

There the demonstrators threw eggs at the building of Corporate Commercial Bank shouting the chairman of its supervisory board Tsvetan Vassilev has stolen the country's money and finances media serving those in power.

In a speech, an activist insisted Corporate Commercial Bank of banker Tsvetan Vasilev is linked to the New Bulgarian Media Group of Irena Krasteva, a former civil servant in charge of the Bulgarian state lottery, and her son Delyan Peevski, a Member of Parliament from the ethnic Turkish party DPS, Movement for Rights and Freedoms, whose media serve the Cabinet. He noted that CCB holds nearly half of the deposits by State-run companies and is widely known as the government's darling, returning the favors through its publications.

The culmination of the protest came with the burning of effigies of Prime Minister, Boyko Borisov, Finance Minister, Simeon Djankov, and Tsvetan Vassilev, while the 800 people on the square waived signs and shouted "Mafia" and "Resignation."

Some of the participants, however, said for BNR they were made to come and bused by smaller towns to Sofia by their bosses.

Those one Garibaldi square were joined by GORD followers who rallied earlier in front of the building of the Bulgarian National Television, BNT.

The demonstration there was in sign of protest against the policies of the State owned media with demands of sacking its management for violating freedom of speech and stopping its State subsidy. BNT journalists have been called by Binev prostitutes serving corporate interests and defense lawyers of the Cabinet Borisov.

She reminded her team always adheres to professional ethics and criteria and BNT has one of the highest approval ratings.

"I am always open to criticism and to everything that is debated in Bulgaria, but not when journalists are called with abusive names. This is not the speech of a politician," said Cheshmedzieva.