Bulgaria's M-Tel Revenues Drop Too in Line with Industry Trend 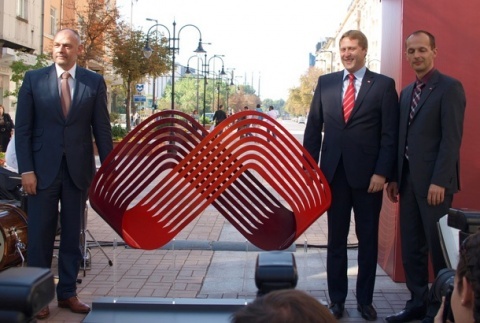 Mtel's CEO Maierhofer (second R) is pictured here at the presentation of the company's new corporate identity at the end of September. Photo by Mobile Bulgaria

The largest Bulgarian mobile phone operator M-Tel, controlled by Telekom Austria, reported a 9.3% fall in revenues to EUR 358.3 M for the first nine months on an annual basis in line with the industry trend.

The company's earnings before interests, taxes and amortizations declined by 19.3% to EUR 164.5 M year-upon-year.

The deteriorating figures come on the back of a cut in interconnection charges by between 50% and 70% as of July 1, 2012, according to a statement by Telekom Austria.

Furthermore, the unfavorable economic environment led to a lower consumption of communication services and strong competition exerted downward pressure on prices, it points out.

Cost saving measures could therefore not fully compensate for the negative effects of market pressure on revenues.

Despite this tense economic environment, M-Tel has succeeded in increasing both mobile subscribers and fixed net access lines by 4.6% to over 5.5 million and by 30.4% to over 142,800 respectively.

Bulgaria's second-biggest mobile operator Globul reported earlier this month a sharp decline in revenues in a worrying sign about the future of its planned sale.

Greek telecoms group OTE will seek to sell its Bulgarian businesses - a mobile phone company and an electronic appliance retail chain Germanos - for no less than EUR 800 M, according to reports.