Bulgaria President: Clean Reputation A Must for Constitution Judges 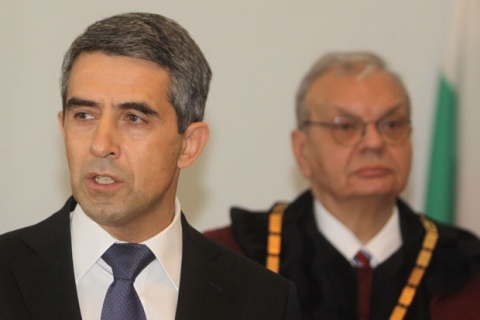 Bulgaria’s President Rosen Plevneliev explained on Thursday that a letter from the prosecutor's office, which he received in the last minute, only made even firmer in his decision to block Markovska. Photo by Sofia Photo Agency

Bulgarian President, Rosen Plevneliev, has defended vehemently his unprecedented decision to leave the ceremony for the oath of office of one of the country's new constitutional judges, blocking her appointment.

"There have been doubts about the moral qualities of one of the chosen constitutional judges. This is the reason why I have repeatedly called on that candidate to first clear her name and then swear in," Plevneliev said, referring to controversial magistrate Veneta Markovska.

Markovska came to the official ceremony on Thursday to take an oath and become a constitutional judge, despite official requests to withdraw following allegations of possible trade in influence.

According to several media reports, the President had left at the moment controversial magistrate, Veneta Markovska, had to be sworn in. He delivered an address to the new members of the Constitutional Court, but left the hall when it had been Markovska's turn to take the oath.

Plevneliev's move in reality blocks Markovska's joining of the Constitutional Court since under the law the oath is considered valid only if taken in the presence of the Head of State.

The president explained that a letter from the prosecutor's office, which he received in the last minute, only made even firmer in his decision to block Markovska.

"It is my duty to prevent turning Bulgaria's Constitutional Court into a hostage to personal interests as this will have very negative repercussions not only in Bulgaria, but abroad as well."