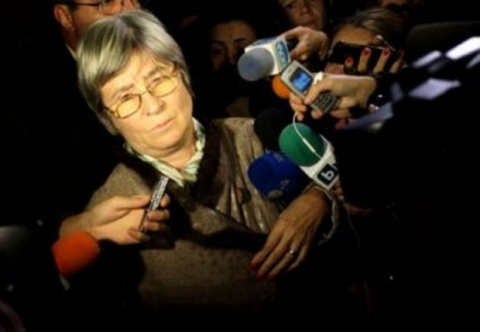 Out of 22, 18 voted for, 2 against and two abstained, paving the way of the controversial magistrate to the Constitutional Court.

It also emerged Thursday morning that Markovska intends to take the oath of office as constitutional judge after she filed her application with VSS.

The VSS Ethical Committee meanwhile has dropped plans to probe the tipoffs against her, bTV reported.

In addition to her, the other three taking the oath at 11 am are: Georgi Angelov, a magistrate from VAS, elected from the judicial quota, former Chief Prosecutor, Boris Velchev, who was nominated by the President, and the second appointment from the parliamentary quota – former Deputy Speaker of the Parliament from the ruling Citizens for European Development of Bulgaria party, GERB, Anastas Anastasov.

The Speaker of the Parliament, Tsetska Tsacheva, the President, Rosen Plevneliev, and the Chairs of the Supreme Court of Cassations, and of the Supreme Administrative Court, VAS, are attending the ceremony.

Plevneliev called on all newly-elected constitutional judges, "except Markovska," to take the oath. Prime Minister, Boyko Borisov, reiterated three times he had asked her to drop her bid, while Justice Minister, Diyana Kovacheva, stated the reputation of one person cannot be more important than the reputation of the State.

Meanwhile, also Thursday morning, VSS finalized the first nomination for Bulgaria's new Chief Prosecutor – the one of the Chairman of the Plovdiv Regional Court, Sotir Tsatsarov, who is rumored to be close to GERB and in particular to Interior Minister, Tsvetan Tsvetanov.