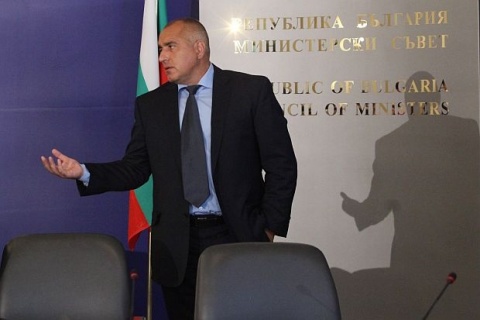 Bulgaria’s Prime Minister urged journalists to resist the tricks of Russian media and not sabotage the gas talks on the very day before the signing of the contract. Photo by Sofia Photo Agency

Bulgaria will seek a gas supply contract with Russian Gazprom for a period of 6+4 years, according to Prime Minister Boyko Borisov.

Borisov declared Wednesday that the contract would be valid for an extra four years in case Bulgaria failed to produce sufficient gas on its own territory.

Borisov's statement came one day before Bulgaria's signing of the final investment decision on the construction of the South Stream gas pipeline.

"In six years' time, Bulgaria will extract large amounts of gas. We have already secured over 10% of our consumption from local production, it is produced by Melrose Resources. I hope that we shall have sufficient quantities of natural gas in six years' time, which is why we want a contract with Gazprom for 6+4 years, in case we fail to find gas," Borisov stated.

Reminding that the issue of gas supplies involved huge amounts of money, he asked Bulgarian media not to sabotage the talks, urging them to resist the tricks of Russian media.

"The matter involves a lot of money which the Bulgarian economy has been paying. We want to achieve a maximum discount and to use all the leverage available to us. So please, help us for one day – stay out of it," Borisov declared, specifying that he did not mean to offend Bulgarian journalists, whom he held in high esteem, "save for some exceptions."

Borisov pointed out that he would give a press conference on gas supply issues at 11 p.m. on Thursday.

Delyan Dobrev, Minister of Economy, Energy and Tourism, declared on Wednesday that Bulgaria and Russia had not yet reached agreement on the price of gas from 2013 on.

He assured that Bulgaria would get a discount of at least 11%, which entered into force on April 1 and will remain valid until December 31.

Meanwhile, Gazprom CEO Alexei Miller came up with a statement insisting that the price of natural gas for Bulgaria and the construction of the South Stream gas pipeline were unrelated.

As regards the new prices of Russian gas for Bulgaria, he underscored that all necessary amendments to the contract had been made in 2012.