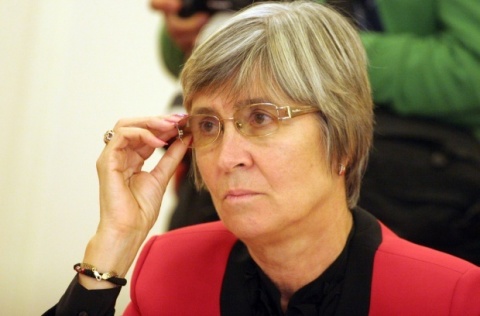 Controversial Bulgarian magistrate Veneta Markovska has filed her resignation as judge and Deputy Chair of the Supreme Administrative Court (VAS), clearing the path to her appointment as constitutional judge. Photo by BGNES

Controversial Bulgarian magistrate Veneta Markovska has filed her resignation as judge and Deputy Chair of the Supreme Administrative Court (VAS), clearing the path to her appointment as constitutional judge.

Although she wanted her oath of office as constitutional judge to be postponed, she fulfilled the necessary requirement for stepping in office, according to reports of the Bulgarian Telegraph Agency (BTA).

The resignation is to be voted by the Supreme Judicial Council (VSS) on Thursday.

If the resignation is approved, Markovska will have to take her oath of office as member of the Constitutional Court on Thursday.

She was elected as member of Bulgaria's Constitutional Court from the parliamentary quota with the support of ruling center-right party GERB.

Markovska's nomination and subsequent election as member of Bulgaria's Constitutional Court from the parliamentary quota stirred up plenty of controversy over allegations that she had attempted to use her influence to pressure the Interior Ministry into suppressing an investigation.

Borisov called upon Markovska to step down on three occasions.

On Wednesday, Bulgaria's PM reiterated that his ruling center-right GERB party was only responsible for the election of constitutional judge Anastas Anastasov, who was officially endorsed by the party.

He added that he did not know whether Markovska would take the oath of office on Thursday.

"I am sure that the Prosecutor's Office will conduct a swift investigation to determine whether judge Veneta Markovska is innocent or not," Borisov stated, as cited by the Focus news agency.

Markovska's case made the European Commission issue a warning that it could publish an emergency report on Bulgaria under the so-called Cooperation and Verification Mechanism.

Markovska has continuously and vehemently denied all accusations of attempting to abuse her influence but has failed to produce a coherent alternative narrative of the events.