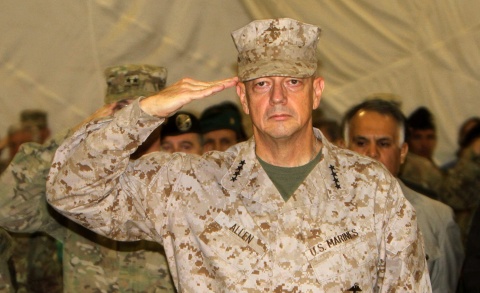 A file picture dated September 14, 2012 of US Marine General John Allen, the top US and NATO commander in Afghanistan, attending a change of command ceremony of Italian soldiers in Herat province, Afghanistan. Photo by EPA/BGNES

Top US commander in Afghanistan General John Allen is being investigated for allegedly sending "inappropriate emails" to a woman at the center of the "Petraeus" scandal.

The "inappropriate emails" were, reportedly, sent to Jill Kelley, a married woman and socialite from Tampa, Florida, whose complaint led the FBI to uncover Gen Petraeus's extramarital affair with Broadwell.

Jill Kelley had already been named in the Petraeus scandal after she told the FBI early in the summer she had received anonymous harassing emails.

When the FBI investigated, it traced the emails to Paula Broadwell, bringing to light her affair with Gen Petraeus.

Late on Monday, the FBI carried out a search of Broadwell's home.

Kelley has been described as a volunteer with wounded veterans and military families at the MacDill Air Force Base in Tampa, which is headquarters of the US Central Command.

She is a family friend of Gen Petraeus, but there is no suggestion that they were having an affair.

A senior Pentagon official said up to 30 000 pages of emails and other documents from Gen Allen's communications with Kelley between 2010 and 2012 were under review.

Gen Allen has denied any wrongdoing.

Gen Allen was due to face a Senate confirmation hearing on Thursday. If approved, as had been widely expected, he was expected to become NATO's top commander in Europe at the beginning of 2013.

BBC further reports that US Defense Secretary Leon Panetta has said in a statement that the Federal Bureau of Investigation (FBI) referred the matter to the Pentagon on Sunday.

Gen Allen will remain in his job, but Panetta said he had asked for the General's pending NATO nomination to be delayed and President Barack Obama had agreed to the postponement.

Panetta has ordered a Pentagon investigation of Gen Allen on Monday, and has requested that the US Senate Armed Services Committee move promptly on the nomination for Gen Allen's successor in Afghanistan, Gen Joseph Dunford.

Panetta has praised Allen's work in Afghanistan and has criticized the FBI for not informing members of US Congressional intelligence committees of its investigation.

He was deputy commander of Central Command before taking over in Afghanistan. He is also a veteran of the Iraq war.

Gen Petraeus's affair with Paula Broadwell, who co-authored his biography, began following his retirement from the army and about two months after he became Director of the CIA. He said it ended about four months ago.

Gen Petraeus joined the CIA in September 2011 after heading international forces in Iraq and later in Afghanistan.

He had been due to testify before a closed-door congressional committee meeting about the September 2012 attack on the US consulate in Benghazi, Libya, that killed the ambassador and three other Americans.

According to BBC, acting CIA Director Michael Morell will testify in his place later on Tuesday, although Gen Petraeus may be called at a later date.