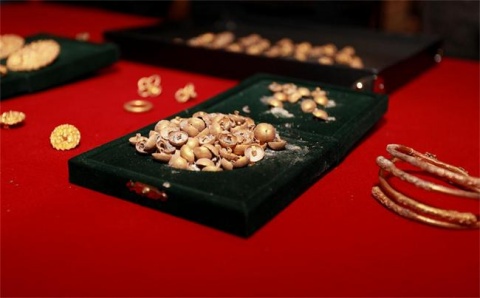 The unique gold Thracian treasure, recently discovered in the famous Sveshtari tomb in Bulgaria, has become extremely popular on the British BBC.

The Bulgarian Standard daily writes Tuesday that the video clip about the treasure, believed to have belonged to the Gath ruler Kotela, one of the fathers-in-law of Alexander the Great, has been one of the most viewed on the BBC site. The British media report about the discovery ranks among the top three in the "most viewed and shared video clips."

Bulgaria's Thracian gold has surpassed in popularity topics such as the resignation of the BBC Head, the premiere of the Halo 4 computer game, the hurricane Sandy, and even the news about the US presidential election and Obama's victory.

One day ago, Bulgaria's Culture Minister, Vezhdi Rashidov, informed that the treasure would be soon displayed at the Louvre. He said the world-famous museum has provided one of its largest and central halls for the exhibit of Thracian culture on Bulgarian lands.

The treasure includes 264 unique gold adornments, which can be seen on display at the National Archaeology Museum in downtown Sofia, beginning Tuesday, November 13.