Bulgaria, Greece, Romania Vow to 'Speak with One Voice' in EU 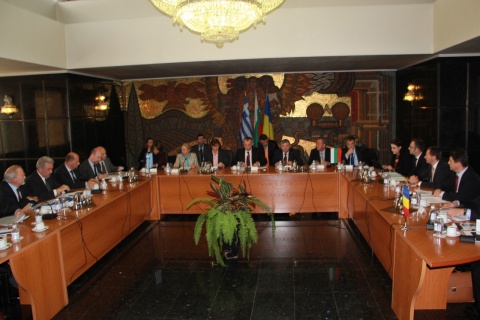 The foreign minsiters of Bulgaria, Greece, and Romania held a meeting in a trilateral format as the representatives of the three major Balkan EU member states. Photo by Bulgarian Foreign Ministry

The Balkans' three major EU member states, Bulgaria, Greece, and Romania, have set out to "speak with one voice" in the European Union, their foreign ministers made it clear in a trilateral meeting in Sofia Monday.

"I hope to get away from the image of the Balkans as a region in which we cannot co-operate, and show that here is the contribution of the EU is towards better co-operation and coordination," Bulgaria's Foreign Minister Nikolay Mladenov told a joint news conference that he gave together with his Greek and Romanian counterparts after the trilateral meeting of the foreign ministers of Bulgaria, Greece and Romania.

The primary goal of the meeting was to lay the groundwork for a permanent mechanism of co-ordination among the three countries on all matters relating to the European agenda, regional cooperation in South Eastern Europe, security and other issues of common concern, Minister Mladenov said during the meeting, during which he also elaborated on Bulgaria's objection to the problematic nationalist rhetoric of the political leaders in the Republic of Macedonia, a candidate for EU accession.

"When a country, in co-ordination with its neighbours, can speak in the name of three, we become stronger in discussions and prove that we have outgrown all the contradictions that have divided us," Bulgaria's top diplomat added.

"Individual voices do not sound as strong as the common voice. For this reason, this sub-regional format is extremely important," his counterpart, Romanian Foreign Minister Titus Corlatean, said in turn

The emphasis in the talks was the topic of EU enlargement to the Western Balkans, according to the Bulgarian Foreign Ministry press service.

"The expansion is important for our security, stability and prosperity. The combination of the economic difficulties of the region, increased populist rhetoric, xenophobia and nationalism created a climate that must be overcome to enable countries in the region to successfully walk the path of reform so that they can become part of the EU," Mladenov elaborated.

Greek Foreign Minister Dimitris Avramopoulos said that it was very important for these countries to meet all the criteria for membership, including the development and maintenance of good neighbourly relations.

"Our vision is to transform the Balkans into a model of co-operation and friendship for the whole world," he said.

According to Sofia, another objective of the meeting was to discuss the possibility of a common mechanism for training and exchange of diplomats.

"This will create the possibility, in the upcoming EU Presidencies of Greece, Bulgaria and Romania, for us to be able to work in a more co-ordinated and orderly fashion," Minister Mladenov said.

At the meeting, the three ministers also discussed the negotiations on the EU Multiannual Financial Framework, the opportunities provided by the Lisbon Treaty for co-operation in the field of the Common Security and Defence Policy, Black Sea co-operation, the Cohesion Policy and the prospects for joint projects with the Western Balkans.

The full text of the Joint Declaration of the Foreign Ministers of Bulgaria, Greece, and Romania is available of the Bulgarian Foreign Ministry website HERE