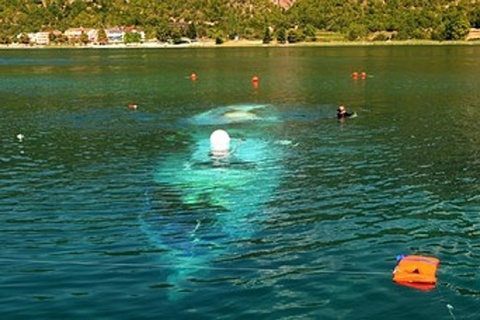 The incident happened on September 5th, 2009, when the boat, with 55 Bulgarian passengers on board, on its way to the St. Naum monastery, overturned and sank in the waters of the lake. Photo by BGNES

The families of the 15 Bulgarians, who drowned in the Macedonian Lake Ohrid back in 2009, seek BGN 10.5 M in compensation, it was revealed on Sunday.

The families' civil claim is against two insurance companies, Allianz Versicherung and Germanischer Lloyd, their lawyers have told the Bulgarian Telegraph Agency.

The relatives are also seeking BGN 70 000 for material damages.

In August 2012, the Appellate Court in Bitola, Macedonia, upheld the verdicts of ship captain Sotir Filevski and Lloyd representative Branco Baic in the case of the sunken tout boat Ilinden, which killed 15 the Bulgarians in September 2009.

On July 5, 2011, exactly 22 months after the Ohrid Lake tragedy, the court in Ohrid sentenced Macedonian Sotir Filevski, captain of the Ilinden ship, and Croatian Branko Baic, representative of the German company Lloyd, which issued the necessary certificate ensuring Ilinden can be used to transport tourists, to one year behind bars.

According to a bilateral agreement signed in 2002, Bulgaria recognizes the Macedonian courts' civil law verdicts.