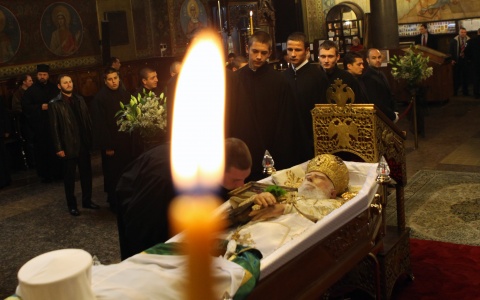 Bulgaria's late Orthodox Patriarch Maxim was buried Friday in at the Troyan Monastery in central northern Bulgaria, as per his will.

Patriarch Maxim passed away at the age of 98 on Tuesday.

Maxim was born Marin Minkov in the Oreshak village near Troyan in 1914, and began his monastic life at in the local monastery, one of the largest and most renowned in Bulgaria.

The funeral service and mass for the deceased patriarch were held Friday at 9 am at the St. Alexander Nevsky Cathedral, where Maxim's body was laid in state before being interred in Troyan.

Patriarch Maxim was in charge of the Bulgarian Orthodox Church for 41 years.

Bulgaria's high clergy will elect the country's new Orthodox Patriarch within the next four months.

Bulgaria's government declared Friday a day of national mourning over the death of the Patriarch.