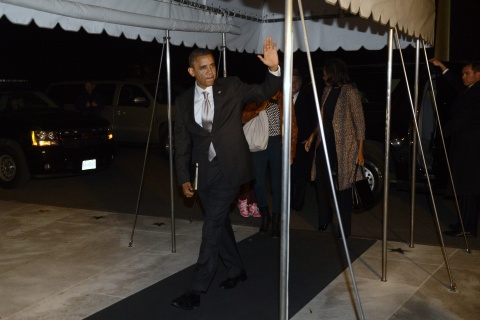 US President Barack Obama (C) waves as he walks into the South Portico of the White House with the First Family, in Washington DC, USA, 07 November 2012. Photo by EPA/BGNES

The US President-reelect, Barack Obama, has had a very short break to rejoice over the win, as he has returned to Washington to attempt to overcome a deadlock with Republicans over reducing the deficit.

If the deal falls through, the US will face a serious fiscal crisis, known as the "fiscal cliff" because the Bush-era tax cuts are due to expire at the end of 2012, and automatic, mandatory across-the-board cuts to military and domestic spending will kick in.

After the November 6 election, the Republicans retained control of the House of Representatives, while the Democrats kept the Senate.

House Speaker John Boehner hinted at the possibility of a compromise if the President agreed to a tax reform, BBC writes Thursday.

Boehner, who negotiated with Obama over a so-called "grand bargain" of spending cuts and new revenues in 2011, said he would accept new revenue-raising as part of a tax reform deal.

BBC further informs that even before he flew with his family from their Chicago base to Washington Wednesday evening, Obama had phoned the Speaker to emphasize the need to reach a budget compromise when Congress returns next week.

In his first public remarks since the election, Boehner said Republicans in the House of Representatives stood ready to work with the President on avoiding the "fiscal cliff."

He said Republicans - previously strongly opposed to any new tax-related revenue - would be willing to compromise as long as the tax code was reformed and accompanied by changes to social benefit programs.

"Mr President, this is your moment. We're ready to be led, not as Democrats or Republicans, but as Americans," Boehner has said. "We want you to succeed."

The British media further comments that Obama's prospects for his second term will largely depend on his relationship with Boehner and Congressional Republicans.

Vice-President, Joe Biden, is quoted saying that there was much work to be done, adding that negotiations would depend on how cooperative the Republicans prove to be.

In his acceptance speech at his Chicago campaign headquarters Tuesday night, Obama also pledged to consult his campaign rival Republican Mitt Romney and explore ways to work together.

These conciliatory statements came after a slump in the Dow over nervousness the negotiations between Democrats and Republicans in Washington DC will remain at stalemate.

Economists warn that if the negotiations fall through the "fiscal cliff" to become effective in January 2013 can lower the GDP and lead to recession.

BBC also notes that Obama was reelected with the highest unemployment rate - at 7.9% - for any incumbent president since the US wartime leader Franklin Roosevelt.