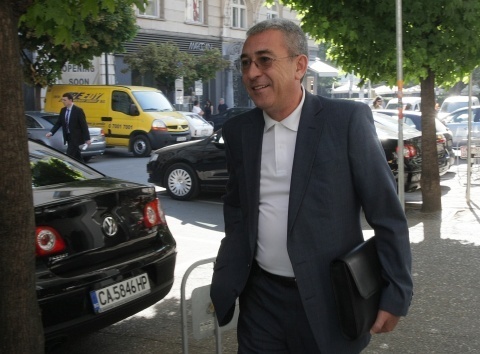 The Chairman of the Supreme Court of Cassations, Lazar Gruev, had voiced the strongest criticism of the new rule to introduce electronic voting in the election of the new Chief Prosecutor. Photo by BGNES

The news was reported by the Bulgarian Trud (labor) daily, citing an undisclosed insider source.

The nomination of the Chairman of the Plovdiv Regional Court, Sotir Tsatsarov, 46, is the first one so far.

It had been backed by the former Deputy Chief Prosecutor, Mihail Kozharev, who had been the first one to sign it.

For this reason, he submitted his resignation one week ago before the Supreme Judicial Council, VSS. The resignation was approved unanimously.

Meanwhile, Boyko Naydenov, just reelected by VSS as Head of Bulgaria's National Investigation Services, has been appointed Bulgaria's interim Chief Prosecutor after Velchev's last week resignation. He hinted he is inclined to enter the race for Chief Prosecutor.

VSS also decided Thursday on the rules for electing the Chief Prosecutor, stirring suspicions that the strong lobby backing Tsatsarov had tailored them especially for him in an attempt to secure his post.

In order to be elected, a candidate needs 17 votes from VSS members.

However, as the Bulgarian site Mediapool notes, the balance between the members shows that Tsatsarov would have a great chance if his nomination is to be voted first and separately from all others.

In order, the play this scenario, the majority in VSS had eliminated the traditional ballot vote and had decided to introduce electronic voting, Mediapool informs.

On top of the above, VSS have decided that when one nomination collects the required 17 "for," the others would not be voted at all, along with not using the alphabetical order of the names of the candidates, but the order of the submission of their concepts.

The Chairman of the Supreme Court of Cassations, Lazar Gruev, had voiced the strongest criticism of the new rule to introduce electronic voting in the election of the new Chief Prosecutor, precisely on grounds the ballots would show how everyone had voted for all nominations.