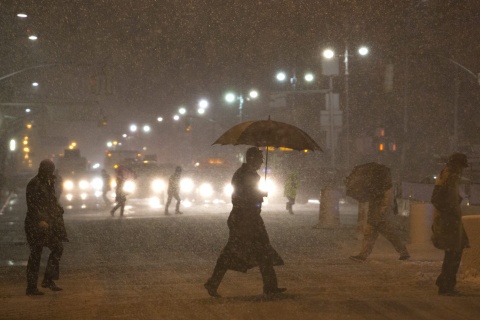 Commuters make their way through the financial district as the area deals with a winter storm in New York, USA, on November 7 2012. Photo by EPA/BGNES

The US East Coast, reeling from monstrous storm Sandy and difficulties in organizing the November 6 presidential election in its aftermath, has been hit by another natural disaster.

A huge snow blizzard is raging in New Jersey, New York, and Connecticut, leaving thousands without electric power once again. An estimated 22 000 households are in the dark at a time when 640 000 are still expecting their power to be restored after Sandy.

The snow and the strong winds have stirred chaos at airports with the cancelations of thousands of flights. The railroad transport is also affected.

The storm had also killed 69 people in the Caribbean

Freshly-reelected, President Barack Obama has spoken to the governors of New York and New Jersey on Wednesday, with the discussions focused on the continuing fuel shortages in the region.