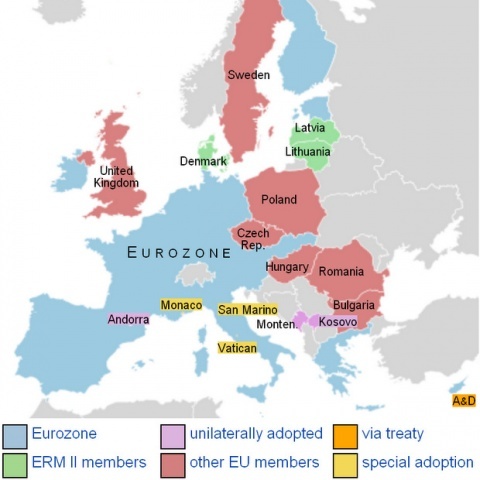 Latvia seems set to become the 18th member of the Euro Area. Map from Wikipedia

Latvia's government has approved a draft law submitted by its Finance Ministry providing for the adoption of the euro as of January 1, 2014.

According to the draft legislation, three months before the adoption of the common European currency, and six months after that, all princes in Latvia will be both in euro and in Latvia lats (LVL), ITAR-TASS reported.

Once Latvia joins the euro zone on January 1, 2014, there will be a two-week period in which both currencies will be accepted throughout the country, the law stipulates; ATMs in Latvia will cease to distribute lats as of January 1, 2014.

The law for Latvia's euro adoption will enter into force once it becomes approved by the Parliament and signed by the country's president.

Latvia's government decided to adopt the euro back in March 2010; since then, it has had to meet the Maastricht Criteria of having low inflation, a budget deficit below 3% of the GDP, and a public debt below 60% of the GDP.

According to Latvia's Finance Ministry, the Maastricht Criteria were met in September 2012.

Latvia insisted last Friday that it was on course to join the eurozone in 2014, waving aside concerns about the stability of its economy.

"I see Latvia's future in the eurozone," Prime Minister Valdis Dombrovskis told a conference in Riga organized by the Bank of Latvia. "In one word, the euro zone means stability and growth," he added, as cited by The Baltic Course.

Unfazed by the eurozone crisis, Latvia has kept its national currency pegged to the euro and argues that it makes sense to join the troubled monetary bloc because its main trade partners are already members, writes LETA.

The government has targeted January 1, 2014 for Latvia to become the euro-zone's 18th member and insists that the country's figures already meet all the Maastricht criteria governing euro adoption.

The criteria, set down in the 1992 Maastricht Treaty that created European economic and monetary union, include limits on a country's deficit, debt and inflation. They have been breached by many of the countries currently using the euro – though internal policing has been beefed up – and in any case are a hurdle for would-be members.

The only remaining obstacle appears to be whether Latvia's economy – marked in the last decade by extreme swings between growth and recession – is now deemed to be on a "sustainable" path.

To enter the euro-zone, Latvia requires a green light from the European Central Bank and the European Commission, which is the executive body of the full, 27-nation European Union. A decision is expected in the first half of 2013.

Latvia has been hailed by organizations such as the International Monetary Fund as an example of how to use austerity to build a recovery, after its completion in December 2011 of a three-year, EUR 7.5 B international loan program. The rescue plan came as Latvia tumbled into the world's deepest recession during the global crisis, with its economy shrinking by a cumulative 25% in 2008-2009. The slump came in the wake of breakneck growth fuelled by easy credit and fast-rising wages after Latvia joined the EU in 2004.

The austerity measures applied by Dombrovskis's government have gone far beyond those deployed in Western European nations. Growth returned last year, clocking 5.5%, and a similar figure is expected this year, making Latvia the fastest-expanding economy in the EU. Euro-zone membership has also been a key goal for neighbors Estonia, which joined in 2011, and Lithuania, aiming for 2015. Asked if Latvia expected to be admitted in 2014, Finance Minister Andris Vilks replied: "Of course."