US: Lifting Visas for Bulgarians Will Not Be Political Decision 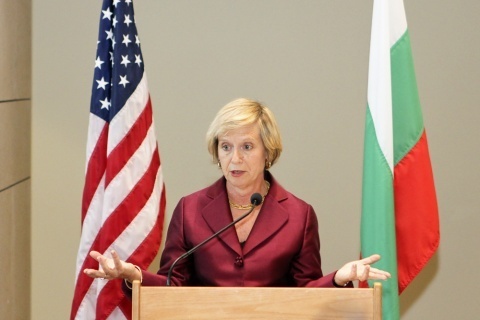 US Ambassador to the Republic of Bulgaria, Marcie Ries. Photo by US Embassy

The potential abolishment of the US visa regime for Bulgarians will not be a political decision, US Ambassador in Sofia Marcie Ries has declared.

"This program has certain requirements imposed by the US Congress," she has explained, as cited by dnevnik.bg.

The Ambassador added that she expected Bulgaria and the US to continue working together for abolishing the Balkan country's visa regime.

It is too early to say whether US President Barack Obama will schedule a meeting with Bulgarian PM Boyko Borisov or President Rosen Plevneliev after his reelection on Tuesday, Ries also told reporters.

She described the relations between the US and the European Union as "excellent."

Commenting on Obama's reelection speech, the US Ambassador singled out the following passage as particularly inspiring:

"We are not as divided as our politics suggests.  We're not as cynical as the pundits believe.  We are greater than the sum of our individual ambitions, and we remain more than a collection of red states and blue states.  We are and forever will be the United States of America."