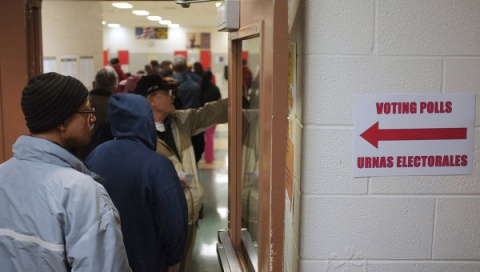 Voters in the state of Maryland. Photo by RIA Novosti

US voters in the states of Maine and Maryland became the first to approve legalizing same-sex marriage through a direct vote.

Early results in Minnesota and Washington are too close to call.

Same-sex marriage is already legal in six US states and the capital, Washington, DC. However, it was legalized there only through legislative or court actions.

Los Angeles Times reminds that the controversial issue had been before voters 32 times and had been rejected every time.

"When the history books are written, 2012 will be remembered as the year when LGBT Americans won decisively at the ballot box," Chad Griffin, president of the Human Rights Campaign, has commented in a statement.

President Barack Obama, who was reelected on Tuesday, endorsed same-sex marriage in May 2012.