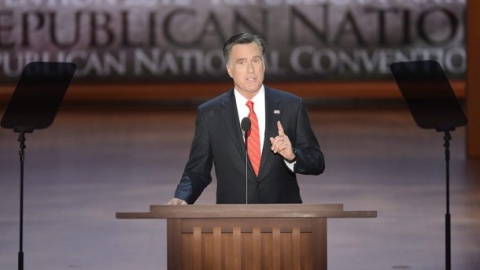 Romney Concedes US Election To Obama Mitt Romney conceded defeat, saying: "I have just called President Obama to congratulate him on his victory." Photo by EPA/BGNES

Republican Mitt Romney has conceded the US presidential election and congratulated rival Democrat Barack Obama with the victory.

Romney addressed a very sober and quiet crowd of supporters in Boston, Massachusetts, where he served as Governor. He told them he had already called Obama to offer congratulations.

"I wish all of them well, particularly the president, the first lady and their daughters," he said.

"I believe in America, I believe in the people of America and I ran for office because I am concerned for America," a moved Romney stated in a concession speech.

He said he wished he had fulfilled the hopes of his supporters, but now prayed for Obama.

Earlier Wednesday, incumbent US President Obama was reelected to the US Presidency with 303 Electoral College votes so far, against 206 for Romney.

Romney, closeted with advisers in Boston, did not immediately concede defeat because of questions about whether Obama had really won the pivotal state of Ohio. But other projected Obama victories in Virginia, Nevada, Iowa and Colorado carried the president past the 270 electoral votes needed for victory.