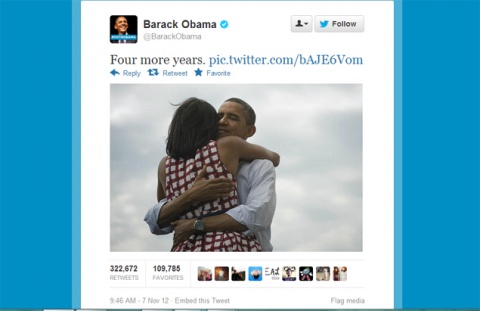 US President Barack Obama tweet a photo of him hugging his wife as a celebration of his reelection. Photo from Twitter

Barack Obama has been reelected President of the United States of America in a close battle claiming victory with posts on his Twitter and Facebook pages.

"This happened because of you. Thank you," he tweeted on his official account. And then a minute apart, tweeted.

"We're all in this together. That's how we campaigned, and that's who we are. Thank you. -bo", and "Four more years" with a picture of him hugging wife Michelle. The initials "bo" mark these as personal messages; his first tweet was quickly "retweeted" 1,71,731 times.

This is only the second time in several decades that a Democrat has won a second term in the White House.

Crowds went wild across the country as all major US television networks projected that Obama would win at least 274 electoral votes, enough to defeat his Republican challenger Mitt Romney.

Election day in the United States also became the most tweeted about event in US political history, with enthusiastic netizens firing off 20 million poll-related tweets, the social network said, as cited by NDTV.

Americans flocked to Twitter and other platforms all day in a massive social media burst, posting photographic proof they had cast their ballots, cheering their favorite candidates along and analyzing the latest polls.

"With 20 million tweets, Election Day just became the most tweeted about event in US political history," Twitter announced on its official government and politics account @gov.

The number far surpassed the 10.3 million tweets sent during the first presidential debate last month - an event the popular social network had at the time billed a record in US political history.

In an indication of the importance of social networks in the presidential race, both Barack Obama and Mitt Romney took to Twitter, Facebook and Reddit just hours ahead of polls closing to make last-ditch pushes for votes.

The campaigns have used social media extensively over the past few months to push people to vote and even try and beat the record 2008 turnout, when two-thirds of US voters cast a ballot.