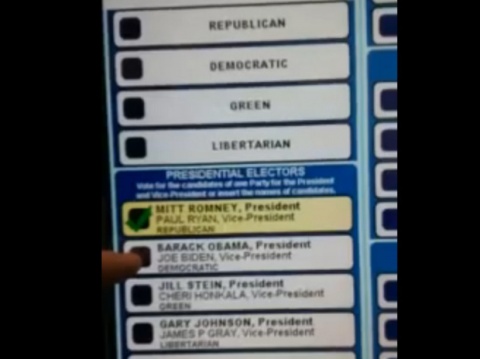 A snapshot from the YouTube video demonstrating how a polling machine in Pennsylvania "cheated" in favor of Mitt Romney.

A voting machine in Millertown, Pennsylvania, has been "caught" cheating in favor of Republican presidential candidate Mitt Romneyl.

Election officials reported having to recalibrate the electronic voting machine after one voter recorded a video of it registering a vote for incumbent US President Barack Obama as one for his Republican challenger, Mitt Romney.

The video drew thousands of comments on YouTube and was first confirmed by NBC News.

But Ron Ruman, a spokesman for the Pennsylvania secretary of state's office, told CNN the machine was taken offline after the man complained about it, election workers recalibrated it and there have been no more complaints.

Voters waited for two hours in northern Virginia and three hours in some parts of south Florida, leading some people to walk away before casting a ballot.

In Pennsylvania, nonpartisan election monitors from Philadelphia's Committee of Seventy said two voting machines had broken down at one precinct on the city's north side, forcing poll workers to issue provisional ballots. That slowed down an already long line, and at least 30 voters had dropped out, the group said.