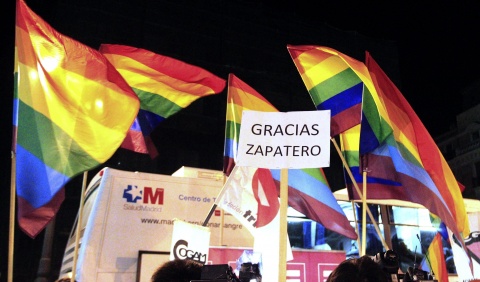 People wave rainbow flags and a banner with `Thank you Zapatero` during a celebration after the Spanish Constitutional Court decision to guarantee gay marriages, in Madrid, Spain, 06 November 2012. EPA/BGNES

The Spanish Constitutional Court has defended same-sex marriage in rejecting a challenge filed by the conservative Popular Party against the law authorizing such unions, which was enacted by a Socialist administration.

Nearly 25 000 couples have been wed under the law since it was enacted in 2005 by Spain's then-Socialist goverment.

According to court officials, the verdict was passed by a vote of 8-3, EFE reported.

In its challenge, the PP - now in power - said the measure denaturalizes "the basic institution of marriage" as it has been known up to now.

No sooner was the Constitutional Court's ruling made public than Justice Minister Alberto Ruiz-Gallardon said that the government will abide by the decision reconfirming the gay-marriage law.

For their part, gay and lesbian organizations celebrated the Constitutional Court's ruling because "at last" all citizens, independently of their sexual orientation, are acknowledged to have the same rights and duties.

To such reactions, the president of the Family Forum, Benigno Blanco, stressed that the court's decision will undermine the trust that "many Spaniards" have in the constitution.

He told EFE that his group will continue calling for the law to be repealed.

Spanish Prime Minister Mariano Rajoy said Tuesday, before learning of the court's ruling, that the PP only challenged the 2005 law for the word "marriage" and not for its judicial effects, "which don't matter to us."