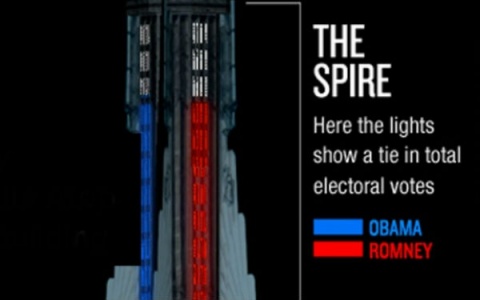 The mast of NYC Empire State Building will be illuminated Tuesday night in blue and red on two sides to represent Obama and Romney's respective tally in the vote. Photo by mashable.com

Residents and visitors of New York City will see the results of the heated US presidential race displayed on the Empire State Building Tuesday into Wednesday as the towering construction will be illuminated with LED lights.

CNN reports that in addition to being illuminated in red, white and blue vertical stripes, the mast of one of the city's top landmark will be highlighted in blue and red on two sides to represent incumbent President, Democrat Barack Obama and challenger, Republican Mitt Romney's respective tally in the vote.

The Empire State Building is teaming up with the news network to display the data on its LED-illuminated "meter."

CNN will air live images of the illuminated tower from the rooftop of a neighboring building, the network informs on its official blog.

When CNN projects a winner of the November 6 presidential election, the tower lights of the Empire State Building will change color to all-blue or to all-red.

Since 1932, the Empire State Building has illuminated its towers in different colors to celebrate holidays, events and charitable organizations, however, its brand new LED-technology will be used for the first time.