Who Is Who in US Presidential Race: Democrat Barack Obama 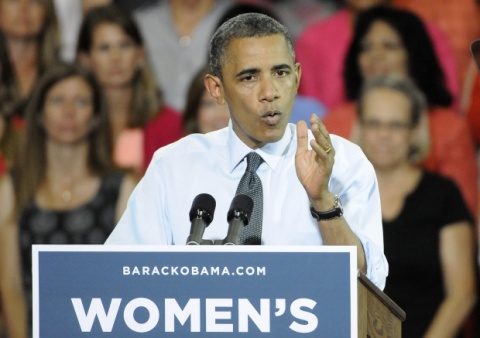 Democrat Barack Obama, 51, the incumbent 44th president of the US, is running for a second term in office. Photo by EPA/BGNES

Democrat Barack Obama, 51, is the incumbent 44th president of the US.

He is the child of a mixed marriage between a white woman from Kansas and a Kenyan man. After their divorce, he became estranged from his father and spent most of his childhood in Indonesia and later in Hawaii with his maternal grand-parents. Obama's bellowed grand-mother died on Election Day in 2008, when he won his first term in office.

The incumbent President graduated from Columbia University in NYC in 1983 and began a job in the private business there. In 1988, he enrolled in the Harvard Law School, and became the first African-American editor-in-chief of the prestigious Harvard Law Review.

At the beginning of the 90s, he worked in a campaign to register voters in Chicago and taught constitutional law at the Chicago University. When he joined a law firm in the city, specializing in human rights, he met the current First Lady, Michelle Obama.

Obama's political career began in 1996 with the election for the Illinois State Senate. In 2008, he won the Democratic nomination against former First Lady and his current Secretary of State, Hillary Clinton, which led to his victory against Republican, John McCain, and made him the first African-American President of the US.

He inherited the missions (wars) in Iraq and Afghanistan, but mostly a serious economic crisis, now threatening his reelection.

As President, Obama is credited with signing the American Recovery and Reinvestment Act, a package of economic stimuli in the amount of USD 831 B, including tax cuts and investments in education, infrastructure, energy research, health and with saving the automobile industry by a new bailout.

The highlight of his internal policy became the Affordable Care Act, nicknamed Obamacare, aiming at providing affordable healthcare for all Americans. The Act mandates all to buy health insurance, while restricting insurers' ability to deny coverage based on pre-existing illnesses. It offers States grants to increase enrolment of the poor in the Medicaid public insurance program.

Obama cut effective taxes for most Americans. He vows to repeal Bush-era tax cuts for households making more than USD 250 000 a year. He is a fan of introducing the "Buffet rule" named for billionaire Warren Buffet, which would increase the effective tax rate paid by millionaires.

He also backs investment in clean energy such as wind turbines and advanced car batteries and worked for stricter standards for car fuel efficiency and emissions. The incumbent President obstructed the project for the Keystone oil pipeline from Canada to the Gulf of Mexico on grounds there was a need for more time to access its environmental impact.

The highlight of his foreign policy is the killing of much of al-Qaeda's leadership, including Osama Bin Laden.

After initially increasing the number of troops in Afghanistan, Obama started to reduce them with the goal to end the mission by 2014. He also pulled US troops out of Iraq and sealed a deal with congressional Republicans for nearly USD 0.5 B in defense cuts.

The incumbent President signed new sanctions against Iran's central bank, oil revenues and financial system. He opposes Iran's development of nuclear weapons along with military actions against the country, insisting on a diplomatic solution.