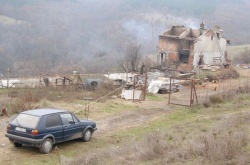 Todor Todorov's villa after the police operation carried out to detain him. Photo by Hristo Hristov / LegalWorld.bg

The Strasbourg Court of Human Rights has found Bulgaria guilty of failing to protect the right to life of a convict who was killed in a bombastic police operation led by then police chief secretary and current PM Boyko Borisov.

The case relates to events back in 2003 when businessman Todor Todorov aka Chakara had to be detained to serve 6 months in prison for giving premises belonging to him to be used as а brothel.

Todorov however refused to deliver himself to the police, and instead barricaded himself in a villa near southern Bulgarian town of Harmanli.

The police and special units even used a grenade launcher against the house and caused a fire, which eventually resulted in the convict's death.

In a decision announced Tuesday, the European Court of Human Rights in Strasbourg determined that the Bulgarian police had used inordinately excessive force against the convict and did not respect his right to live.

Police knew that Todorov was alone in the house. However, the operation included 55 regular police officers, 30 people from a special counter-terrorism unit, 19 border police officers, 3 psychologists and, at its close police chief secretary Borisov himself.

A Bulgarian military court investigation of what happened did not find any breaches of procedure in the actions of the police.

The official police version was that Todorov blew himself up with a hand grenade.

The European Court of Human Rights has decided that Bulgaria has to pay Todorov's widow and two sons EUR 50,000 indemnities.

"If there is a real Prosecutor's Office in Bulgaria, it must right away start an investigation against Boyko Borisov," stated one of the claimants' lawyers, Mihail Ekimdzhiev, for the site LegalWorld.bg.

In interviews after the tragic incident Borisov has stated that he assumes all responsibility for the operation, which according to him was flawlessly executed.