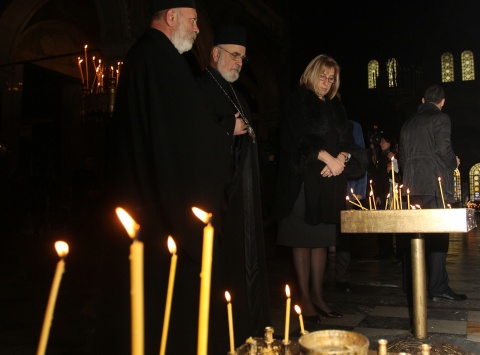 Bulgarian President Rosen Plevneliev and PM Boyko Borisov have sent letters of condolences to the Holy Synod of the Bulgarian Orthodox Church on the passing of its leader, Patriarch Maxim, Tuesday.

"During years marked by storms and temptations, our Patriarch Maxim manifested will and put down great efforts to strenghten the unity of the Church and fortify Christian virtues in our society," writes President Plevneliev.

"In his service to God and His Church, Patriarch Maxim was always and ever led by a deep faith and love for people, by piety and wisdom," adds Bulgaria's President.

"His All-Holiness devoted his whole life to Orthodoxy and the preservation of spirituality. His hard work as a spiritual leader earned him the love and trust of Bulgarians," writes PM Borisov.

"Patriarch Maxim will remain in historical memory as one of the most principled and far seeing heads of the Bulgarian Orthodox Church. His passing is an enormous loss," adds Borisov.

Wednesday the Bulgarian cabinet is expected to announce a national day of mourning for Patriarch Maxim for Friday, when he is to be buried.