Swing States: What to Watch for on Election Night 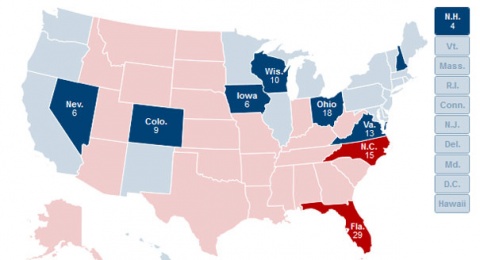 The fierce presidential battle between incumbent President, Democrat Barack Obama, and challenger, Republican Mitt Romney is concluding in the wee hours Bulgarian time Wednesday, even though the final results will be known later.

Because of the US presidential election system of counting Electoral College votes, only several States will become the focus of attention as the heated race comes to conclusion.

Nearly 40 States are considered to be strongholds of either the Democrats or the Republicans, which leaves a handful of states where the election will be decided. These States are known as Swing States (battleground state, purple state) because there no single candidate or party have overwhelming support to the Electoral College votes.

Analysts further say that if Obama wins Virginia, where polls close at 7 pm (2 am Bulgarian time) this most likely means he has won the race.

Polls in the key battleground State of Ohio close half an hour later. Polls in New Hampshire, Pennsylvania and Florida close at 8 pm (3 am Bulgarian time). Romney must win Florida in order to become president, though he has a slight lead there.

Because the two are running neck and neck, US media will be very cautious to declare a victory early on to avoid the 2000 scenario when Democrat Al Gore won the popular vote, but George W. Bush received 271 Electoral College votes, after a recount in Florida.

Ohio is considered the most coveted prize. If Obama indeed wins Ohio's 18 electoral college votes, he's within striking distance of 270, while Romney's job becomes much harder.

No Republican has won the White House without winning Ohio.

Ohio has a Republican Governor, but it also has a large blue-collar population and heavy ties to the auto industry, a sector where Obama is credited for being its savior.

If Romney wins Virginia early in the election, he stays in the game and might secure the coveted victory. A Virginia win, could mean Ohio and Florida are next. After that, he needs one more swing state to become the next president.

If Obama loses Ohio but hangs onto Wisconsin and western Swing States Colorado and Nevada, while Romney adds Florida and Virginia to his Ohio win, then New Hampshire's four electoral votes would prove decisive.

Along with the race for president, all 435 seats in the US House of Representatives and 33 of the 100 Senate seats are being contested in Tuesday's election.  Analysts generally say Republicans will continue to hold their majority in the House, while the president's Democratic party could maintain their slim majority in the Senate.