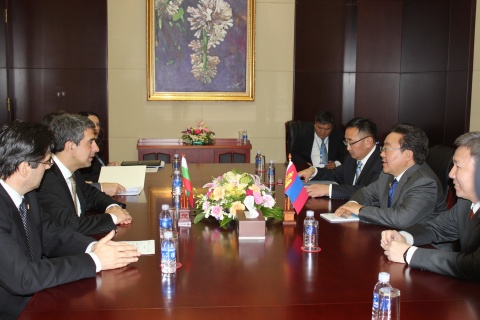 Bulgarian and Mongolian presidents Rosen Plevneliev and Tsakhiagiin Elbegdorj had a bilateral meeting to discuss relations between the two countries in the framework of the Asia-Europe Meeting (ASEM) in Laos.

Meeting in Laotian capital Vientiane, which hosts the 9th ASEM, the two presidents stressed Tuesday that trust is the keystone on which relations between Bulgaria and Mongolia are founded.

The two heads of state agreed to deepen their countries' joint work in the field of military industry and training.

Bulgarian President Rosen Plevneliev presented the traditions and quality of Bulgarian military production, and expressed interest in the opportunities Mongolia gives for military training in camps across the country.

On his part, Mongolian President Tsakhiagiin Elbegdorj expressed his country's interest in signing an agreement of cooperation in the field of military technology with Bulgaria.

The Mongolian leader also said that Bulgarian agricultural products, such as foods, wines and tobacco products, can find a good market in his country.

In addition, Elbegdorj stressed that Bulgarian universities have remained attractive for Mongolian students.