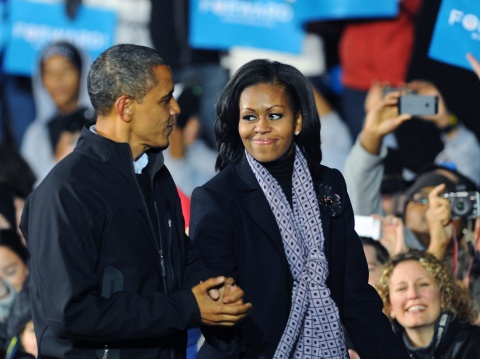 Democratic candidate for United States President, Barack Obama walks with wife Michelle Obama, during his final rally as a candidate, the night before the election, in Des Moines, Iowa, USA, 05 November 2012. EPA/BGNES

US President Barack Obama would have trounced his Republican challenger, Mitt Romney, if the choice was up to China, three separate surveys have indicated.

An unscientific online poll conducted Tuesday by the Global Times showed 81% of more than 4,500 respondents favoring the Democrat, while the survey by Sina Weibo, China's Twitter-like service, drew more than 2,500 responses, 78% of them supporting Obama.

A more scientific AFP-Ipsos online poll, conducted in late September, showed 63% of about 800 Chinese respondents wanted Obama to be re-elected.

In that survey, 58.3% of respondents thought Obama would be the best US president for Asian economic growth, while 56.3% said Obama was better for peace and security in Asia.

Romney was most popular with older Chinese and inland areas and less developed, second-tier cities.