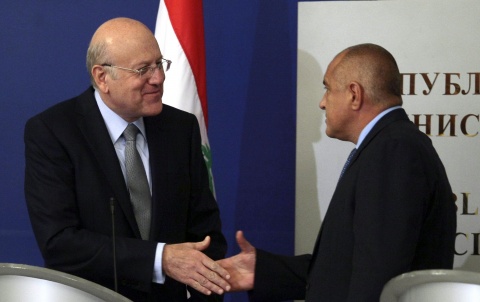 Lebanon's Prime Minister Najib Mikati has warned against premature accusations over the July 18, 2012, terrorist attack in Bulgaria's Burgas, which killed 5 Israeli tourists and one Bulgarian man.

Mikati was on an official visit in Bulgaria on Monday, meeting with Bulgarian Prime Minister Boyko Borisov, among other officials.

"We are all awaiting results from the investigation of the terrorist attack in Burgas. We cannot afford to accuse anybody, whoever, without having conclusive evidence," Mikati told reporters during his joint news conference with Borisov in Sofia.

The Lebanese Prime Minister refused to give an unequivocal answer to the question as to whether the pro-Iranian Lebanese group Hezbollah, which, together with Iran, has been accused by Israel for staging the Burgas Bus Bombing. In spite of Israel's insistence, however, Bulgaria's Borisov Cabinet has abstained from making such accusations.

"Lebanon is definitely against the murder of peaceful civilians. We are denouncing what happened on the Burgas Airport in Bulgaria, and any sort of other terrorist attacks committed by anybody. I believe the Bulgarian government and its institutions are doing anything possible in terms of investigation," Mikati commented.

"We are relying on facts and evidence only," Bulgarian Prime Minister Boyko Borisov commented in turn.

Mikati's cabinet – dominated by powerful Syrian ally Hezbollah – has already come under fire from the opposition, which accuses it of complicity with the regime of embattled Syrian President Bashar al-Assad and has pressed it to resign.

Calls for Mikati to quit were also spurred by a massive car bombing in central Beirut on October 19 that killed three people including a top security official, in an attack the opposition blamed on Syria and its allies in Lebanon.

Borisov and Mikati have also discussed the civil war in Syria between the opposition rebels and the regime of President Bashar al-Assad, among other topics.

"I explained to the Prime Minister of Bulgaria and the Bulgarian government that Lebanon has firmed decided not to take any sides in Syria. This has to do with the security and stability of Lebanon. Our country is not interfering in Syria's domestic affairs in any way. We hope that the international community will be understanding of our position," the Lebanese PM told reporters in Sofia.

"It is important for us that Lebanon remain stable and that the conflict in Syria doesn't get transferred into Lebanon because this will destabilize the entire region. We are firm that the bloodshed in Syria must stop," Bulgarian Prime Minister Borisov stated.

Syria has been in a state of civil war since the attempt for an Arab Spring-type revolution there against the regime of President Bashar al-Assad in March 2011.

The civil war in Syria has already claimed more than 35 000 lives, while hundreds of thousands of refugees have fled the country.