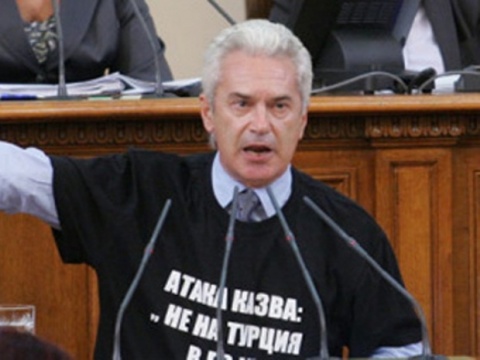 Bulgarian far-right leader Volen Siderov pictured in Parliament with a shirt stating, "No to Turkey in the EU". File photo by BGNES

Bulgaria's far-right party "Ataka" has started a petition among the Members of Parliament in order to ask the Constitutional Court to declare the ethnic Turkish party DPS ("Movement for Rights and Freedoms") unconstitutional.

The reason for Ataka's motion is Monday's statement of Bulgarian ethnic Turkish leader Ahmed Dogan who likened the Balkan War of 1912-1913 in which Bulgarian,Serbian, Greek, and Montenegrin forces liberated much of the Balkans from the Ottoman Empire to the so called Revival Process (or Regeneration Process) – the assimilation campaign against Bulgarian Turks undertaken by the Bulgarian Communist Party regime in the late 1980s.

Ataka leader Volen Siderov called upon the media to boycott the statements of the DPS party, and promised to appeal to all but DPS MPs as well as the President and the Ombudsman in order to table a petition to the Bulgarian Constitutional Court for the ban of the ethnic Turkish party. The nationalists argue that under Bulgaria's Constitution political parties based on religions or ethnicities are illegal.

"It is now clear that DPS is not just an ethnically- and religiously-based parties but it is also involved in seditious activities. With his statement that the Balkan War is "war for ethnic cleansing and other forms that we later defined as variations of the Revival Process", Ahmed Dogan proved that for him the Liberation of Bulgaria from the domination, yoke of the Ottoman Empire was not a positive thing," Siderov declared.

According to the leader of Ataka, the head of the DPS party expresses the point of view of the Ottoman Empire, and later of Turkey, which "is today absolutely indisputably conducting a neo-Ottomanist policy."

Dogan's statement comes just weeks after Bulgaria marked the 100 year since the start of its victorious war against the Ottoman Empire, which conquered the Second Bulgarian Empire in the late 14th centuries and ruled the Bulgarian lands and people for almost 500 years – a period widely seen as shameful and denigrating by the Bulgarians, and known as Ottoman or Turkish Yoke.