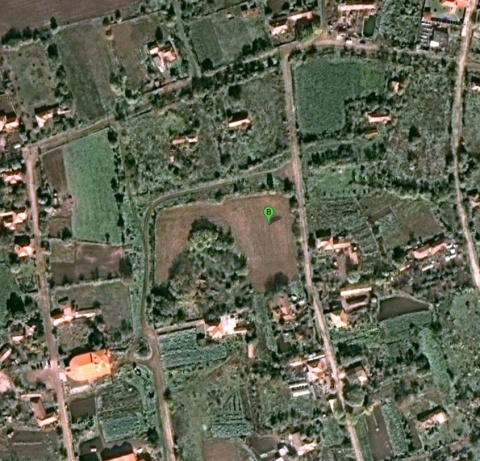 A Google Maps photograph shows the scandalous joint property of a Bulgarian judge and an attorney having no buildings but being cultivated.

The controversial magistrate, Veneta Markovska, who was recently elected constitutional judge, triggering outrage in the EU and in Bulgaria, has been further exposed for several blunt lies.

Ignoring strong criticism from the European Commission that the Parliament is covering up tipoffs against one of the candidates, the Bulgarian MPs elected last Wednesday without debates the 2 constitutional judges from their quota.

They were Anastas Anastasov, Deputy Speaker of the Parliament from the ruling, center-right Citizens for European Development of Bulgaria party, GERB and Markovska, Deputy Chair of the Supreme Administrative Court, VAS.

According to the report, Markovska met at the time with the Deputy Interior Ministers, to demand the sacking of the two police officers. She denies this and other damming information as anonymous libel.

However, the information about the meeting has been confirmed in 2010 by Interior Minister, Tsvetan Tsvetanov, and just two days ago by his Deputy, Vesselin Vuchkov. Vuchkov says the judge has been very nervous about the incident and crying. In the aftermath, the two police officers were indeed fired on grounds of police brutality, despite them insisting Georgiev and the other people in the car were violent, pushed them to the ground, tearing off their shoulder straps. They were later reinstated by the court.

During the stop, Georgiev also produced a VAS card and badge in Markovska's name, which, as it was established later, had expired. The SUV he was in had a permit to park at the VAS lot, registered to the judge as well.

The report contains further allegations about profitable real estate purchases by the judge, her alleged boyfriend and her relatives, including her mother, and of close ties with a defense attorney, whose cases have been under her authority.

According to a Monday report of the site for investigative journalism Bivol.bg, Markovska lied that she never tried cases where the said attorney, Rumen Elenski, has been a lawyer for one of the parties. A check with the VAS administration revealed that she was a member of the panel of judges in at least 6 cases of Elenski.

Bivol.bg have also checked the status of a property that was reportedly acquired jointly by Markovska and Elenski, as the Bulgarian Capital weekly wrote Sunday.

The check of the cadaster registry has shown that the two co-own a land plot in regulation in the center of the village of Ezerets on the northern Bulgarian Black Sea cost.

The property is of 2 839 square meters with Markovska and Elenski owning ? while the other half belongs to Aneta Mihaylova, former member of the Supreme Judicial Council, VSS and of the Inspectorate at VSS from the quota of the ethnic Turkish party Movement for Rights and Freedoms, DPS.

Regarding the other allegedly scandalous acquaintance of Markovska, businessman Georgi Georgiev, the judge also became tangled in controversial explanations, first denying both that he was her boyfriend and that she met with the Deputy Interior Minister, and later saying she had lost her ID card in Georgiev's car and "went to see Vuchkov to retrieve it."

Bivol write Monday that Georgiev is a former business partner of Markovska's son. In 2005, he has acquired a lucrative land plot in the southern Black Sea town of Ahtopol, just meters away from the shoreline, sold to him by the Mayor of the nearby town of Tsarevo in a direct deal for the "symbolic" price of BGN 13 per square meter. The adjacent land plot was sold to another businessman, who donated it to Georgiev later. Meanwhile, the Tsarevo municipality had been filing scores of cases with VAS where Markovska as a judge could interfere.

It also emerged Monday that the Chief of the Sofia police, Valeri Yordanov, has banned the two police officers involved in the brawl with Georgiev from speaking for the media.

The ban became known after journalists from the Bulgarian site Mediapool approached the police with a request for an interview with them.

Immediately after Markovska's election as constitutional judge, the EC announced that Bulgaria might face an interim report on justice and home affairs in case "the situation requires it."

On Monday, EC confirmed that the last-week warning was its official position.

The statement was made by the EC spokeswoman, Pia Ahrenkilde-Hansen, during a briefing in Brussels.

Hansen firmly refuted claims in Bulgaria that Bailly was a temporary spokesperson, on top of it voicing personal opinions.