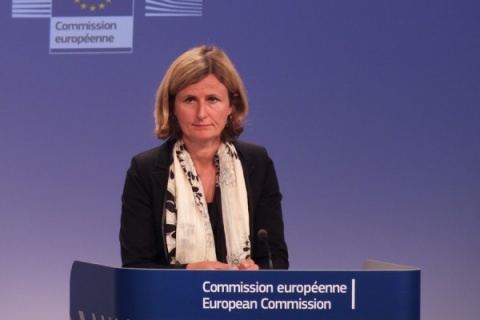 EC spokeswoman, Pia Ahrenkilde-Hansen, reiterated the warning that Bulgaria faces an interim report over judicial appointmentс was the official position of the EU. Photo by EC press center.

The last-week warning of the European Commission about a possible interim monitoring report on Bulgaria is the EC official position.

The statement was made Monday by the EC spokeswoman, Pia Ahrenkilde-Hansen, during a briefing in Brussels.

Hansen firmly refuted claims in Bulgaria that her colleague, Olivier Bailly, who issued the warning, was a temporary spokesperson, on top of it voicing personal opinions.

She added Bailly had stressed that it was possible to have an additional report, without detailing how exactly it would happen.

Markovska, reportedly, met at the time with the Deputy Interior Ministers, to ask for the two police officers to be fired. She denies this and other damming information in the report as anonymous libel.

However, the information about the meeting was confirmed in 2010 by Interior Minister, Tsvetan Tsvetanov, and just two days ago by his Deputy, Vesselin Vuchkov.

There are further allegations about profitable real estate purchases by the judge's boyfriend and her relatives, including her mother, and of close ties with a defense attorney, whose cases have been under her authority.

The Bulgarian MPs continue to stand form behind Markovsa's appointment.

Just hours before Hansen's statement, Prime Minister Boyko Borisov, urged the European Commission to come up and officially announce its accusations against Markovska.

When EC released its monitoring report in July 2012, it was announced that unlike Romania, Bulgaria would not be subject to an interim report until 2013.