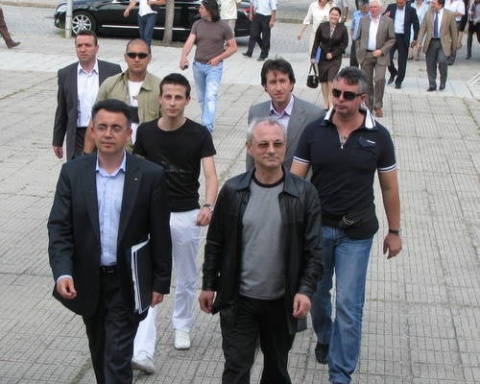 Ahmed Dogan, leader of the ethnic Turkish party DPS (center-front), backed the refusal of the municipal councilors in the city of Kardzhali to make a Bulgarian General and Ottoman liberation hero honorary citizen. Photo by BGNES

Ahmed Dogan, leader of the ethnic Turkish party Movement for Rights and Freedoms, DPS stresses on the need for all ethnicities in Bulgaria to have a common interpretation of the history of the Balkans.

In a rare appearance in public Sunday, he commented on the recent scandal caused by the refusal of municipal councilors from DPS to back the intention of local authorities in the southern city of Kardzhali, which has a large ethnic Turkish population, to award posthumously an Honorary Citizen title to Gen. Vasil Delov. The award was scheduled as part of Bulgaria's celebration of the 100th anniversary since the start of the Balkan War in October 1912, in which Bulgarian troops liberated much of the Bulgarian-populated parts of the Southern Balkan Peninsula from the rule of the Ottoman Empire.

Speaking from Kardzhali, where he arrived as a delegate of the last regional conference of DPS, Dogan explained such common interpretation would mean historians on the Balkans getting together to take alternative looks from the viewpoints of the winners and the losers.

The party leader firmly backed the refusal of the municipal councilors from the ethnic Turkish minority to make the General Honorary Citizen, stressing the common interpretation of Balkan history also meant taking into account not only own political goals but the differences of one's neighbor.

"It means not only make an imperative from one military event, but include in it the human dimensions, because war also means suffering. The very fact that the issue of heroism of the Balkan War was unresolved until World War II, and by the Communist regime, suggests that it is a very deep one; it affects not only the loyalty towards Bulgaria, but the still-persisting memories from the horrors of this War," the DPS leader told the crowd of supporters and followers.

According to him, the case "Delov" can be examined only on national level, and only by the President, not even the Parliament. Dogan explained that raising the issue now erodes the statesmanship and has turned into grounds for division and opposing one part of the population to another.

"Because the Balkan War is not only a liberating war; it is a war for ethnic cleansing, and other forms that later led to the revival process. And we notice lately the flaring anti-DPS strategy and campaign to the extend the Movement is blamed for being the channel of radical Islam infiltrating Bulgaria. Such claims attempt to make DPS look like The Satan and feed energy into nationalist parties ahead of the 2013 general election," the ethnic Turkish leader concluded.

The nomination of Gen. Delov for Kardzhali honorary citizen was included as the last item on agenda for the celebrations of the Balkan War anniversary and the liberation from Ottoman rule, with 16 council people from the Bulgarian Socialist Party, BSP and the ruling center-right Citizens for European Development of Bulgaria, GERB, voting for it, and 22 from DPS abstaining, thus it was not approved.

This marred the celebrations stirring a huge political scandal. It prompted the MP from GERB, Tsveta Karayancheva, to establish and initiative committee that launched a petition to award posthumously to Gen. Vasil Delov the country's highest order Stara Planina.

Just days ago, BSP stated in the Parliament that the Makaza border pass at the Bulgaria-Greek border should be named after General Vasil Delov,