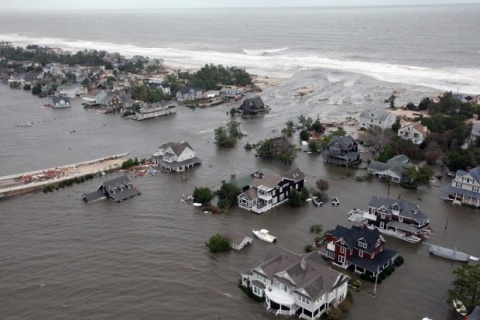 Storm Sandy left 106 people dead in the US, cut power from millions of homes and paralyzed transport on much of the East Coast. Photo by BGNES

The US Federal Government has approved USD 107 M from the federal budget for emergency assistance for people who were affected by hurricane Sandy.

The funds aim to cover costs for temporary shelters and for loans with low interest rates and other financial tools to help peole counter losses and the recovery of the affected areas.

Nearly 38% of gas stations in New York remain closed or lack fuel. New York State governor Andrew Cuomo said help was on the way to ease petrol shortages. Eight million gallons (30m liters) of fuel had been delivered, while another 28 million would arrive in the next few days, according to Cuomo.

The Department of Defense opened in NYC 5 mobile fuel stations where drivers can get 40 liters of gasoline free of charge, which triggered long lines of people and automobiles since dawn.

In New Jersey, Governor Chris Christie declared a limited state of energy emergency from noon on Saturday in 12 northern counties.

Vehicles with number plates ending in an odd number can only fill up on odd-numbered dates, and the same for evens.

Eighty per cent of the subway system was back in service Saturday while only 57 of all 1 700 schools in NYC are to remain closed Monday over serious damage. Since all schools will be closed Tuesday for Election Day, the students from the 57 schools will only miss one school day more than the rest.

Seven tunnels of the subway were flooded by the storm, causing the worst metro damage in its 108-year history and an unprecedented four-day closure. The storm also closed the New York Stock exchange for 2 days – a first since 1888.

Sandy-related power cuts were still affecting some 2.5 million customers in the US early on Saturday, BBC reports Sunday, citing the US Department of Energy's Office of Electricity Delivery and Energy Reliability.

That was down from 3.5 million on Friday.  In New Jersey, 32% of customers remained without power. It has been restored to most of Manhattan, but other parts of New York City are still without electricity.

The storm had also killed 69 people in the Caribbean last week.

Three days ahead of the US election, President Obama warned the recovery process would be "difficult and painful".